French artist, Edmond Dulac (born in England in 1912) designed and created the stamp that was used in France and its colonies. These were also the stamp projects used in liberated France.

Dulac proposed a model representing Marianne for the first time, with the features of Léa Rixens, the wife of the painter Emile Rixens, who was his fellow student at the school of Fine arts in Toulouse.

The first series of the three stamps corresponding to the pre-1942 postal rates was made in heliogravure by Harisson & Sons Printing House in London: a green 25c (for newspapers), a red 1F (for a single letter), and a blue 2,50 F (for the foreign letter). The printing method in gravure and the colors used are those of the English stamps with the effigy of George VI. This first series seems to have been printed in 5,000 copies but it was refused by General de Gaulle because of the legend "R France F". 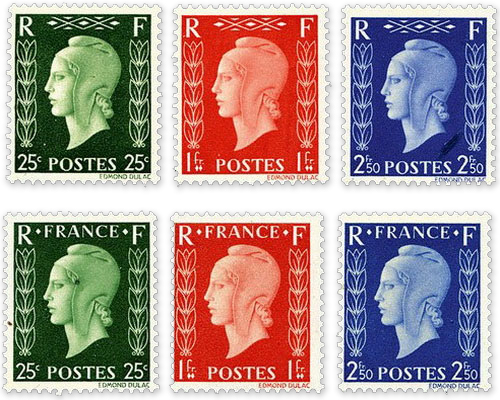 The word "France" is removed and a new series runs 10,000 copies. However, the release did not come out. These stamps had been forgotten, and they did not reappear until 1946, on the American Philatelic market. So they remain unissued.

On 8 December 1943, the Colonies Commissioner instituted a competition in Algiers and decided to involve French artists, residing in Great Britain. He asked to draw inspiration either from themes already covered (the Republic effigy, Sower, Human Rights, etc.). 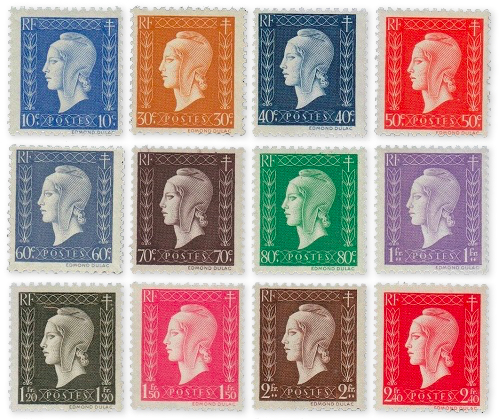 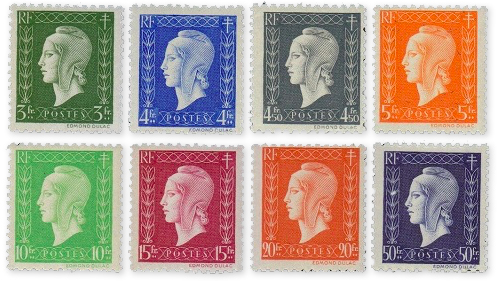 These stamps were intended for circulation in France and twenty colonies. The model included the mentions "RF", "posts", the name of the colony, and a Lorraine cross. Dulac sent a project with the mention of "Algeria". It was adopted on February 10, 1944, but the reference "Algeria" was deleted, as the idea of use in the colonies was abandoned. It was planned to manufacture  11 stamps ranging from 50 cents to 5 francs.

Stamp manufacturing started on August 15, 1944, and the first boxes of stamps were shipped to Paris after August 31. On September 22, Tony Mayer, the head of the stamp service in London, noted that the 1F 50 pink Stamps put on sale in priority in France caused general admiration. However, since the postage stamp workshop had not suffered from the liberation battles and had resumed its work, Tony Mayer did not stop the printing of stamps in London but reduced it by half. The Dulac series ran from March to November 1945. The last sale of the biggest value, (50 F dark purple) raised fears in the Philatelic press as well as the appearance of a 100F and a 200F.

Apart from banknotes, the Marianne De Dulac is found on French stamps issued in fourteen colonies and on colonial tax stamps.

At the same time, 100F banknotes have been made, which would be used in liberated Corsica. Following the liberation of Corsica in September 1943, the CFLN decided to withdraw banknotes in service on the island. A 100F note designed by Dulac was then printed in Britain by Bradbury Wilkinson & Co, LTD. But the two 500F Brown and 1,000F Green Dulac banknotes were put into circulation in 1945 in France. On the 500F note, Marianne looks to the right, unlike other banknotes and stamps. A 5,000F note remains unissued. 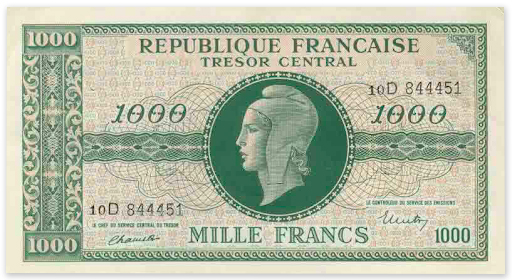 But since these are the subjects of many falsifications, Dulac was ordered a gray sticker "100F Treasury Central ", intended to be pasted on the banknotes to authenticate them. This order was finally canceled in October 1944, and only a few copies of this vignette remain. 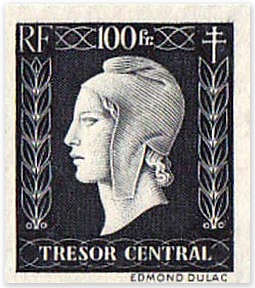 All of these notes were withdrawn from circulation on 13 July 1946.

At the request of the French Government, a so-called “de Paris" printing was carried out by the “Atelier des Timbres-Poste”, from 7 May to 9 August 1948 (sheets of 50 stamps, in fifteen different shades).

The legend and the value of this stamp were replaced by a "Greek", a frieze with regular motifs. The French postal administration would have wanted to prove by this draw that it was able to do as well as the English. In front of the cost price of the print, in bright colors, she does not follow up on this project. 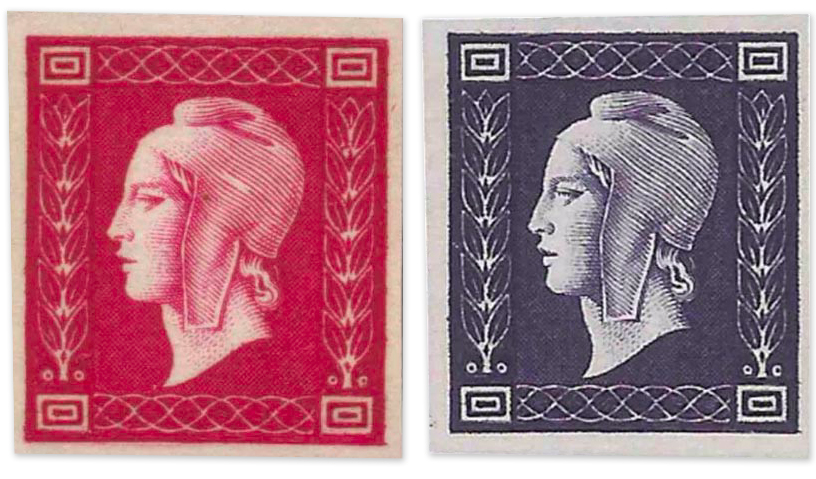