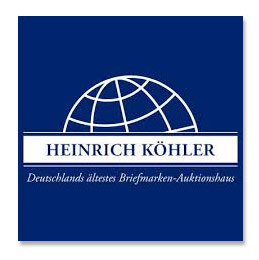 This is the oldest European philatelic auction house. Since the 1910s, the name of Heinrich Köhler has been associated with outstanding auctions in the world of philately. At present, this auction house is an essential part of the global philatelic network. Its activities and events are characterized by high quality and loyalty to traditions. The most famous collectors and philatelists of the early 20th century, for example, Philippe La Renotier Ferrari, Baron Rothschild, and Carl Faberge (the famous court jeweler of the Russian tsars) resorted to the services of the auction house of Heinrich Köhler.

Important milestones in the history of the auction house:

• 1913 the first stamp auction held by the auctioneer.

• 1918 sales of the notable "Reitmeister" collection.

• 1940 the auction houses function despite the complexities and horrors of World War II.

• 1949 the first philatelic auction held at a new location in Wiesbaden.

• 2000 the last sale of Boker collection and Patentanwalt-Emil-Hoffmann's collection sales.

• 2009-2010 during the sale of Fritz Kirchner 's collection, many lots reached record prices.

• 2010 a very significant collection of German postwar history was realized.