10 Most Expensive Stamps of the World Ever Sold at Auctions

It is worth noting that there are many reviews of the most expensive postage stamps, but almost all of them provide either outdated or unverified information. For example, according to some unreliable sources, Penny Black was sold for two million USD, but the price of this piece has never reached this big number and even the best specimens are almost always sold for lower prices. Some articles claim that the Holy Grail was realized for 30 million USD, but this is also false information. It is important to emphasize that the prices indicated in this review do not reflect the actual value of the lots since quite a while has passed since those auctions. This implies that the value of stamps has increased dramatically. For example, British Guiana was realized for 935,000 USD in the 1980 auction, which is 39 years ago. Therefore, its price has only grown. Nevertheless, in this review, we will indicate the actual prices formed In the course of real deals during the stamp auctions. 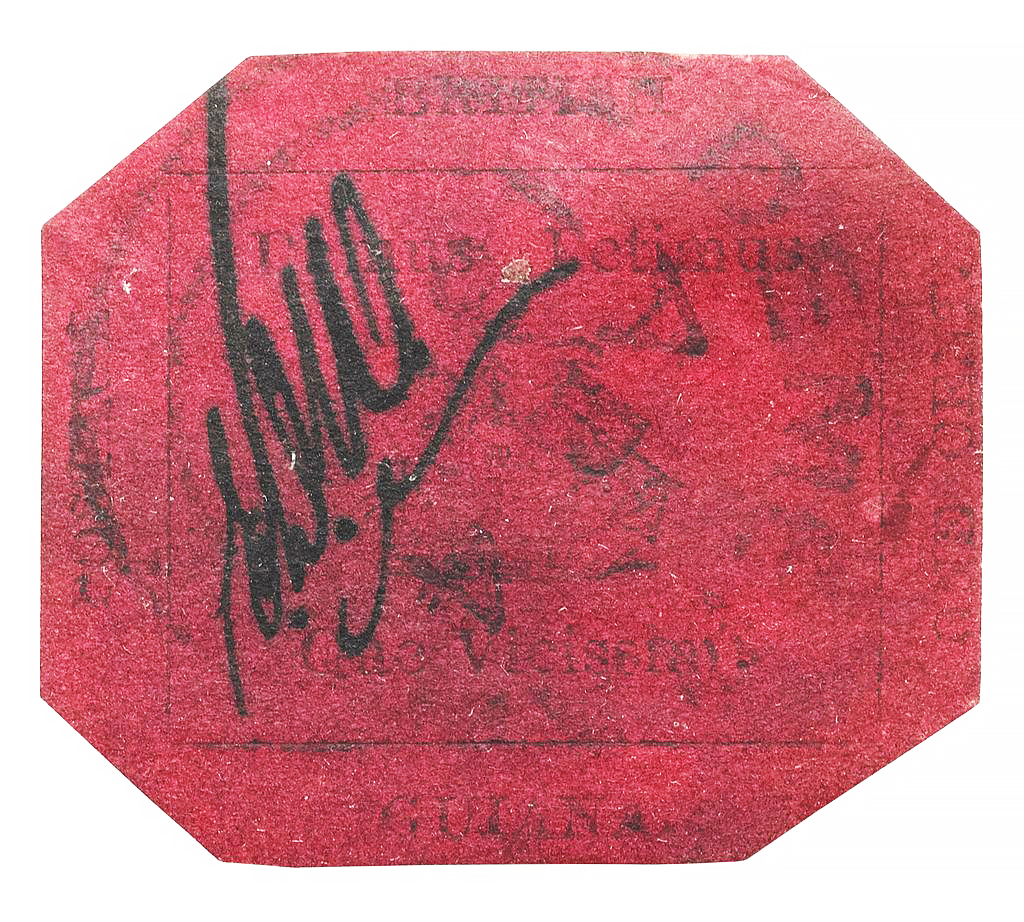 This philatelic rarity is almost always referred to as the Princess of Philately. This beautiful red lot of octagonal shape is a postage stamp of British Guiana. Its denomination is 1 cent as seen from the image above. This lot has no perforation; it was printed using black paint on red paper. As you can see, the stamp has an image of a schooner located in the center. The piece has the cancellation mark and the signature of the postal official. This is the only stamp of this value that exists. As you most probably know, the Princess was discovered in 1873. 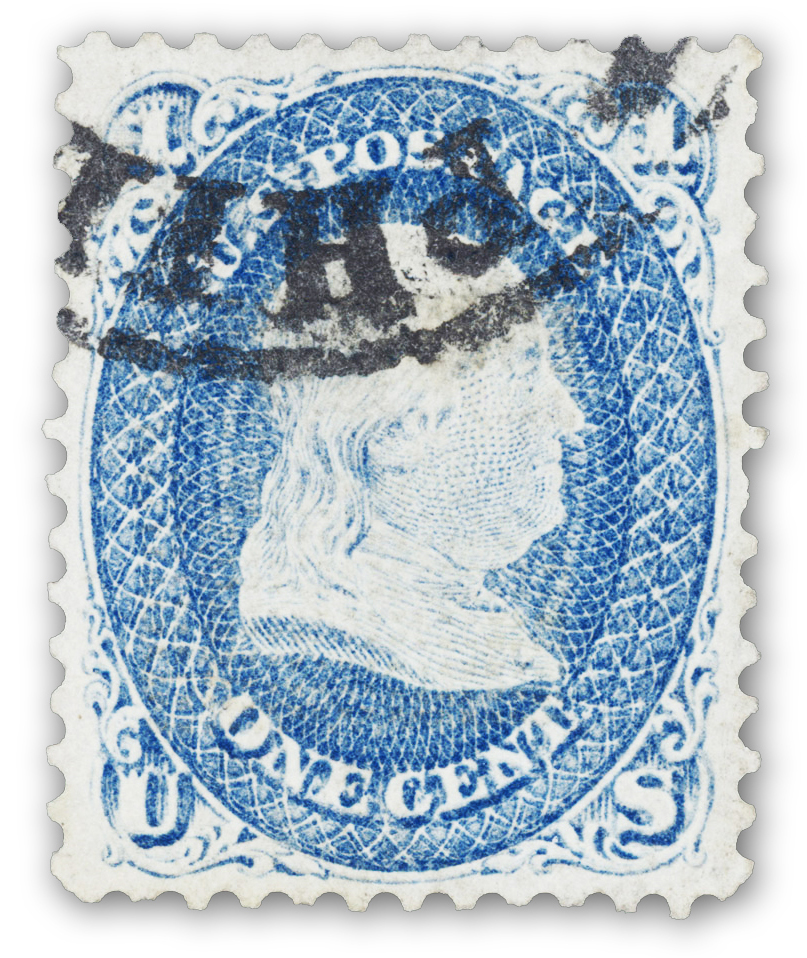 The next most expensive lot is a US 1-cent postage stamp. As you can see on the image, it shows the founding father and the first postmaster of the country. The piece was produced using the method of type Z grilling. It is known about the existence of two copies of this stamp, one of which is kept in New York. The other specimen was offered in 1998 at the Robert Siegel philatelic auction. The final price was 935,000 USD. Seven years later, it was exchanged for a block of Inverted Jenny stamps. 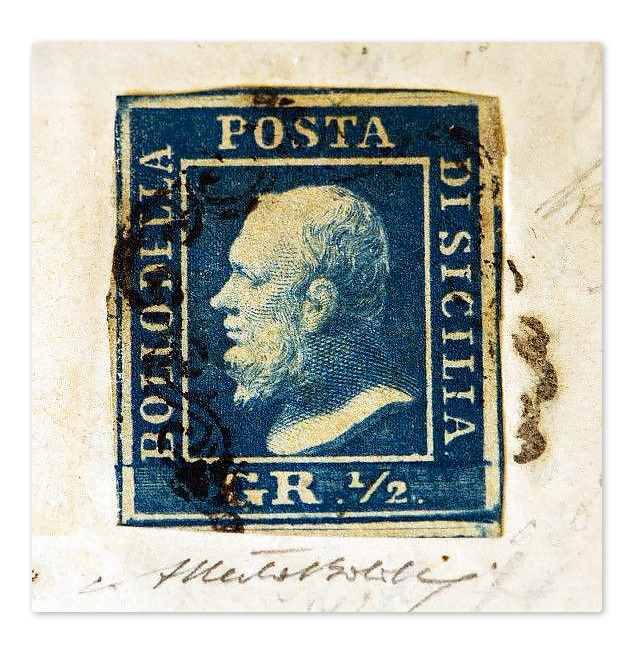 This rarity is often omitted in such reviews for the reason unknown to us. Interestingly, the Sicilian kingdom issued only one series consisting of seven stamps in 1859. In a year, they were withdrawn from circulation due to the unification of Italy. The stamp sow in the image above, which had the lowest face value, was printed in yellow color as indicated by the stamp designer. However, for some reason, a blue stamp with the same design and value was also printed (the color of which coincided with the color of a stamp with a different denomination). At present, two copies of this rarest stamp have been found by the philatelic community. Curiously, both lots came from the same cover. One of the rarities was sold in June 2011 in Switzerland to an anonymous customer from the US. 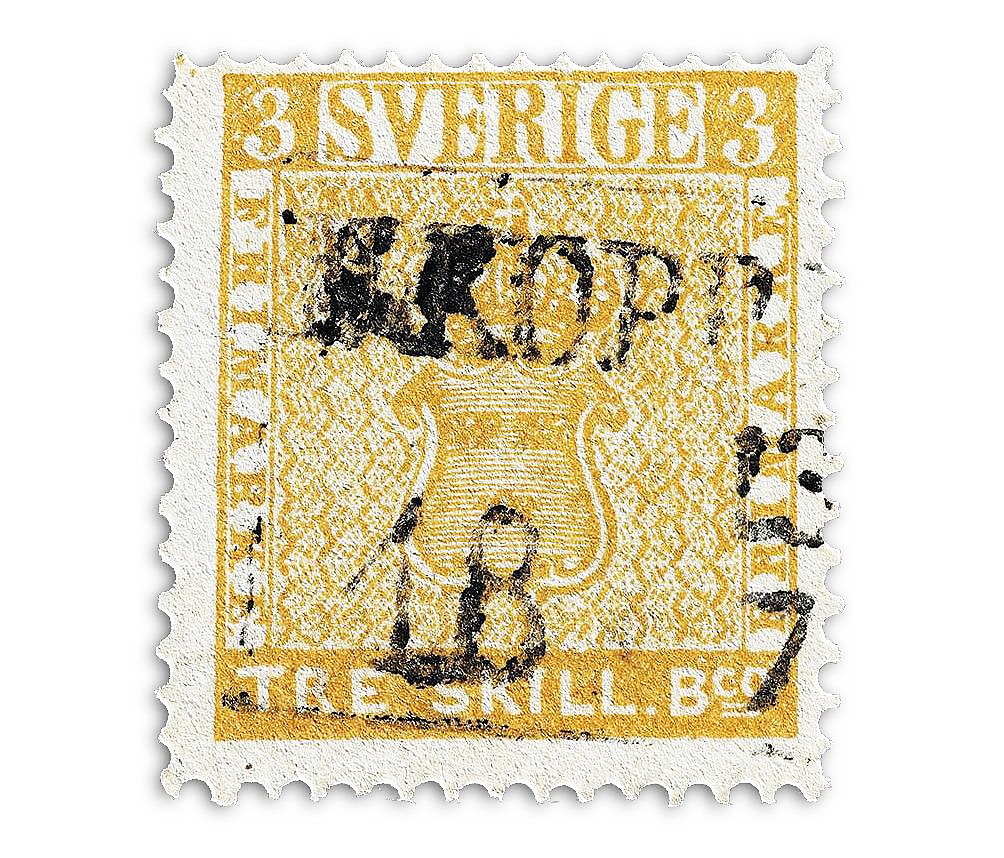 This stamp belongs to the first issue of postage stamps of Sweden created in 1855. The stamp is extremely valuable due to the color error. Initially, the three-skilling stamps were printed in green as denoted by the design. For some reason, this stamp was issued in yellow, which immediately attracted the attention of philatelists. The piece is unique, that is, only one single copy of this stamp exists in the world. This lot was sold at the Feldman auction in 1996. After that, the lot was put up for auction several times, but the price never got higher. In 2010, the rarity was sold at the same auction again. Unfortunately, the price was never revealed to the audience, although some people claim that it is as high as it was back in 1996. 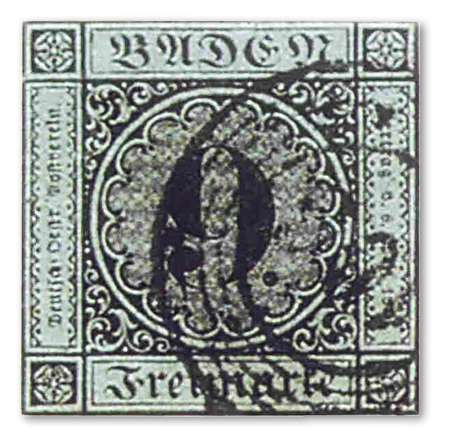 This is another rarity that is not so often observed in reviews. The piece is a very rare black postage stamp printed on blue-green paper with a nominal value of 9 kreutzers. The piece belongs to the very first series printed by the Grand Duchy of Baden. This issue included stamps of four denominations printed on paper of various colors. 9 kreutzer stamp were created using pink paper. However, a sheet was printed on green paper, which was used for cheaper stamps. Currently, philatelists are aware of the existence of one clean and three canceled copies of this rare stamp. The last sale of a canceled piece took place in 1985. It was sold for 2,645,000 Deutsche Marks. The price of the only one unused specimen found in 1919 was 1.3 million euros. 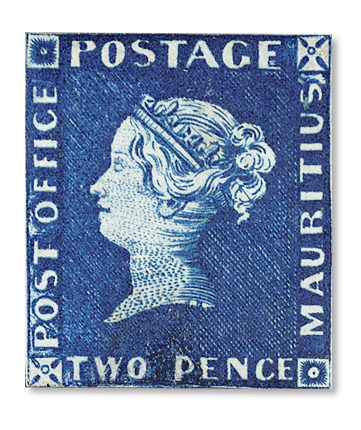 The piece belongs to the very first series printed by the island of Mauritius. At the end of 1850s, an orange stamp with a nominal value of one cent and a blue piece with a face value of two cents were issued simultaneously. It is known about the existence of a dozen copies of this rarity - six clean and six canceled pieces. According to some sources, there are only two clean and ten used stamps. A number of articles claim that the cost of the stamp reaches fifteen million dollars, but in reality, the highest price of this rare lot is 1.15 million dollars. For this amount, the stamp was acquired by a group of buyers who then transferred it to the Museum of postage stamps of Mauritius. At present, after almost twenty years, the price will evidently be significantly higher. Used copies are estimated almost twice cheaper. At the same time, a cover with both stamps on it was sold during the same David Feldman auction in November 1993 for 5 million Swiss francs. 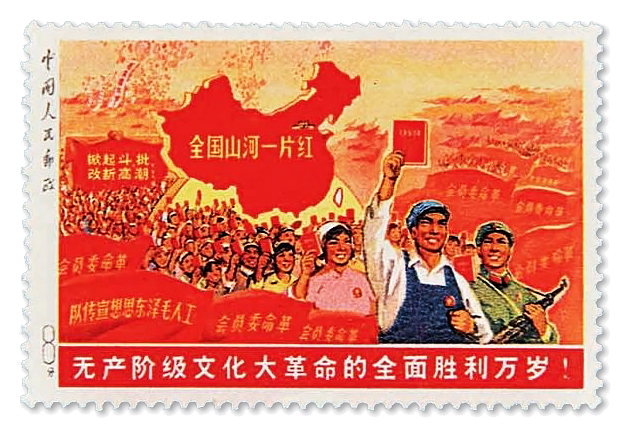 This is China's unreleased postage stamp, which was sold at a philatelic auction 6 years ago for 7.3 million yuan. It is known about the existence of eight copies of this rarity - five clean and three canceled pieces. There is a slight confusion in the names of this and some other rare stamps of the country. At the same time, it is usually emphasized that this is a big red Chinese stamp and it should not be confused with a “small” stamp issued under the same name, which is also quite valuable and rare. 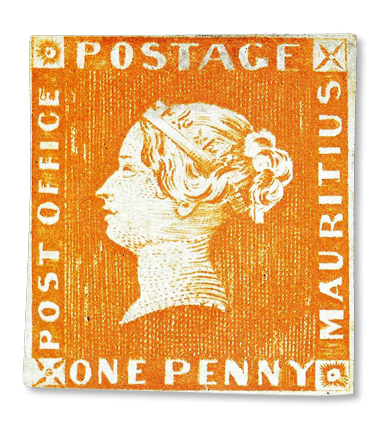 This is another famous and rare stamp printed in Mauritius. There are fourteen known copies - two clean and a dozen canceled pieces. On the first issue of the stamp, there is an inscription saying "Post office" instead of "Post paid". Contrary to the information provided in many sources, this is not an engraver's mistake. In fact, this was an inscription officially approved by the state. The stamps of the next issue have already been printed with an inscription, saying “Post paid”. The price of the piece is determined on the basis of the results of the trades on this rare stamp at the David Feldman auction in 1993. During that event, the orange/pink Mauritius was acquired by the country’s consortium simultaneously with the blue stamp. 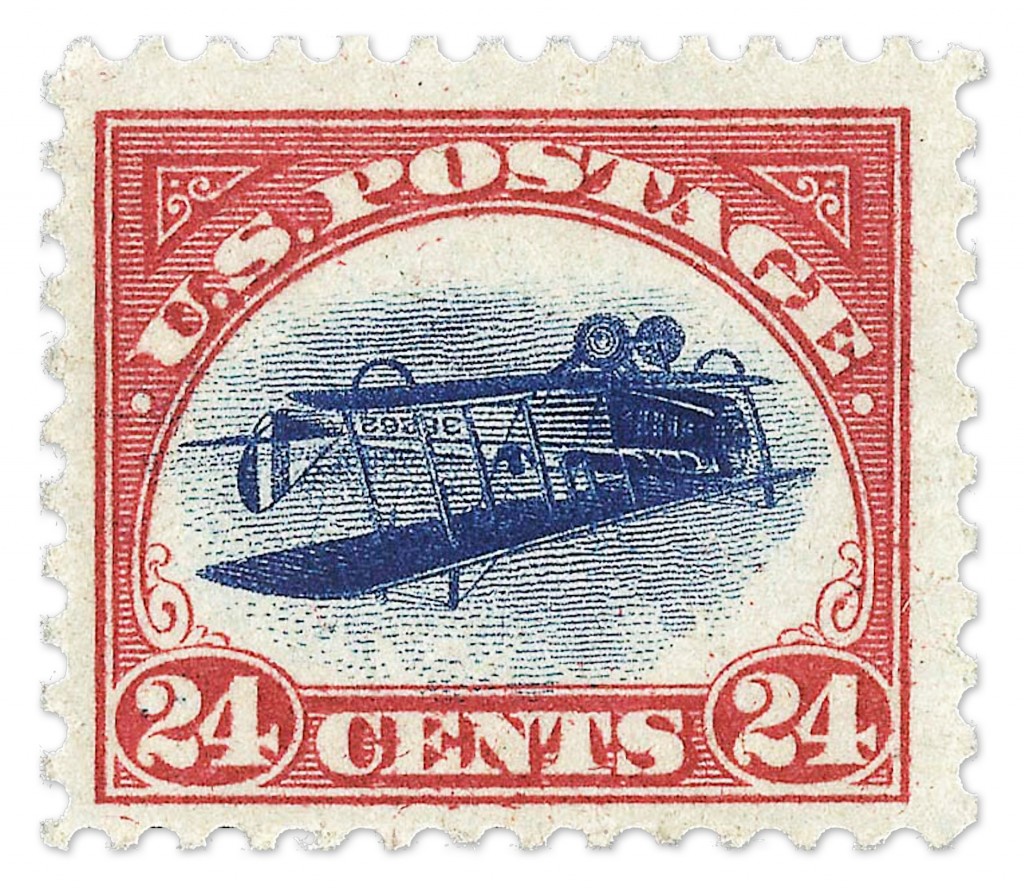 This is an airmail stamp of United States with a face value of 24 cents with the image of an airplane. On some sheets, the plane was printed upside down by mistake. Pieces with the error were destroyed, but one sheet survived and was realized and then divided into separate blocks and individual stamps. In 2005, at Robert Siegel auction, a block of these postage stamps was purchased for 2,970,000 USD and then exchanged for the Holy Grail. A single stamp was sold at the same event for 977,500 USD back in 2007. This is a very high price for this lot given the existence of about eight dozen surviving copies, which means that the piece is not that rare or valuable. 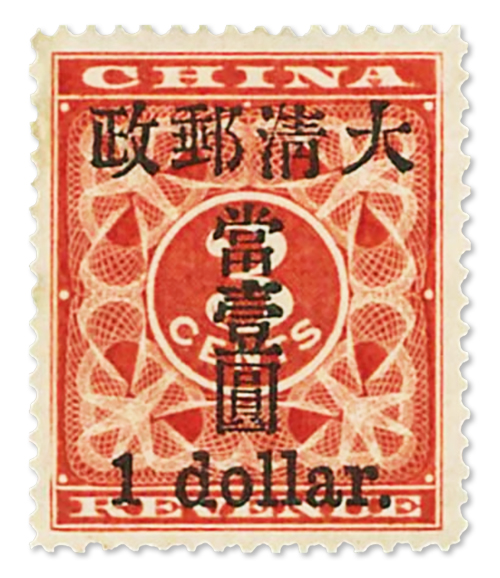 In 2013, at the Interasia auctions, a very rare postage stamp of China issued in 1897 with a nominal value of 3 cents with an overprint of “1 dollar” became the undisputed leader of the event. This rarity cost the new owner nearly 7 million Hong Kong dollars. There are different types of “1 dollar” overprints on a three-cent stamp, which were applied after China joined the Universal Postal Union. Issues with wide hieroglyphs are observed much more often and are estimated to be hundreds of times cheaper than lots with narrow hieroglyphs. There are no more than 32 stamps with a narrow overprint, each of which is assigned a serial number. The lot sold at the auction is the number 9 in the list. There is also one canceled copy known to the philatelic community, which is kept in the museum.