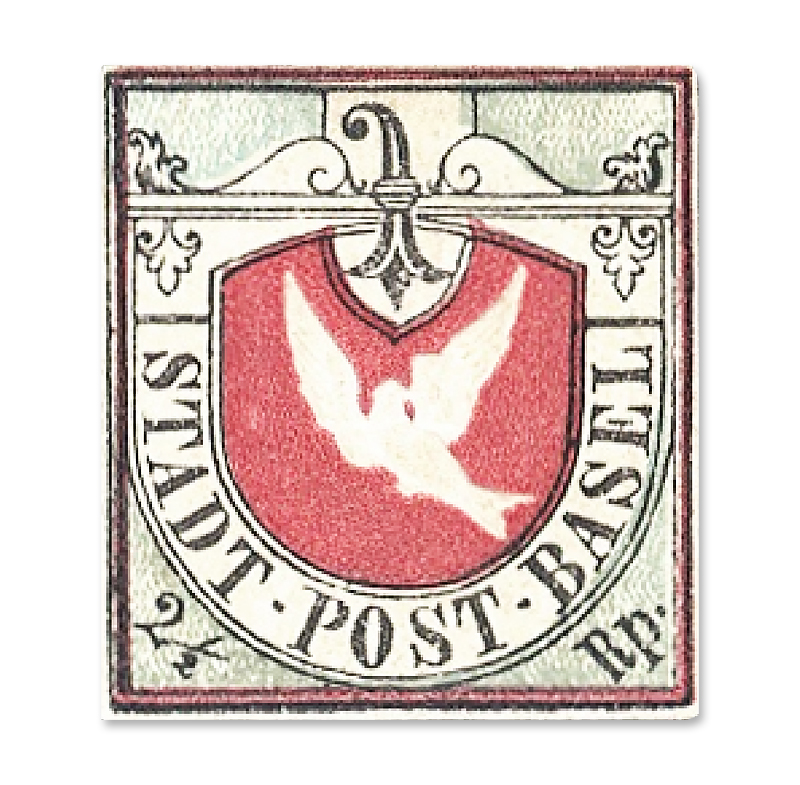 The Basler Taube is the philatelic rarity created and printed in the Swiss canton of Basel. It was issued on July 1, 1845, and this release became one of the first stamp series in the world. Prior to this, only stamps of Great Britain, Brazil, and two other cantons of Switzerland were introduced to the world - in particular, in Zurich and Geneva (during this period each canton of Switzerland issued their own postage stamps). This stamp was in mass circulation until September 30, 1854. On the stamp, with the nominal value of 2½ rappen, a white dove with a letter in its beak is shown, and the semicircle displays the inscription saying “City Mail. Basel”.

This issue was crafted through a peculiar embossing technique, which implied the use of three different colors (this technology was first used in history): the post used black, blue, and dark red ink. Interestingly, despite such innovation in philately, the stamps were met without much enthusiasm from the side of the population and were soon withdrawn from circulation. As stated above, the release was the first and the last in the history of the area. In 1848, the cantons united into a federation, and from 1850, uniform postage stamps were issued with the image of a postal horn and a Swiss cross.

The peculiarity and value of this stamp lie not only in the fact that it has been the first tricolor stamp but also in the fact that the canton no longer issued stamps for internal use. The piece is quite rare, but anyone can see its image on the mailboxes in Basel. The design was created by a famous Swiss architect. Apart from the aspects mentioned above, this series was the first one to show an image of a bird (that is, the first stamp on which one could see the image of a representative of the animal world. Therefore, it served as a source of inspiration for the creation of further series with different species of fauna. The Basel Dove differs from other stamps through the use of the beautiful light green color. A total of about 42,000 stamps were printed in the series until it was called back in 1854. According to some sources, the Basler Taube costs at least $20,000, but its estimated price varies from 12,500 to 37,500 US dollars.

The only known Basel 3 AOUT VOR-MITTAG that was sold at Corinphila.

It should be noted that these rare stamps can be seldom noticed at stamp auctions or offered by stamp dealers. However, several years ago, a similar piece was sold by the Cherrystone auction house for 11 thousand dollars. It was an unused copy with original gum (part of it). The piece was sold for the amount less than estimated by the expert committee. Earlier, in 1997, a vertical pair was sold for 170,000 Swiss francs at Corinphila. This was the only known pair with Vor-Mittag cancellation mark.