Iceland: The Most Expensive and Rare Stamps

The history of Iceland's post and postage stamps includes an early period corresponding to the Danish postal system (Iceland was part of it) and periods of use of Danish postage stamps and times when the country developed its own independent issuing policies (starting from 1873). Curiously, the postal service of this country is known for the fact that 10 years ago the postal authorities announced that it issued three stamps in honor of the eruption of Eyjafjallajökull volcano. They were made by silk-screen printing and contained grained trachyandesite ash that was erupted from Eyjafjallajökull volcano in April 2010. In this review, you will find the top 10 most rare stamps of this country. 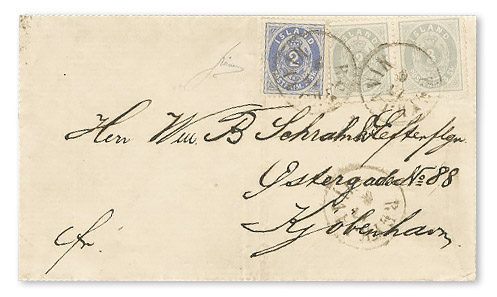 This beautiful 3sk stamp glued in the top right corner of the letter was sold 13 years ago at Cherrystone's auction. It was issued back then when the country was still part of Denmark. This definitive stamp is characterized by average centering and is in almost perfect condition. 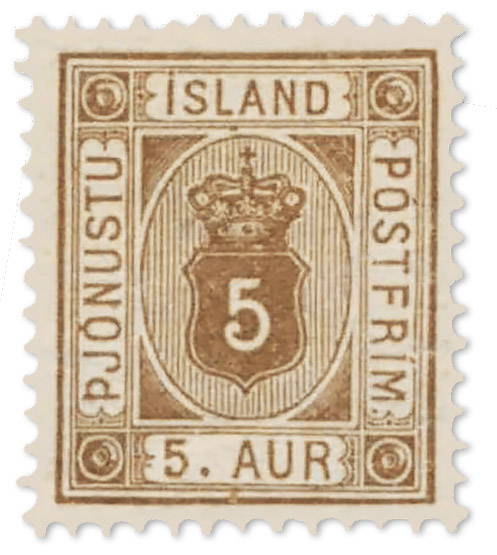 The next lot is a genuine rarity, which exists in 3 copies only. The piece is in good condition, beautifully colored, but slightly hinged though. The peculiarity of this stamp lies in its perforation, which an experienced collector will spot immediately. The lot was realized last year. 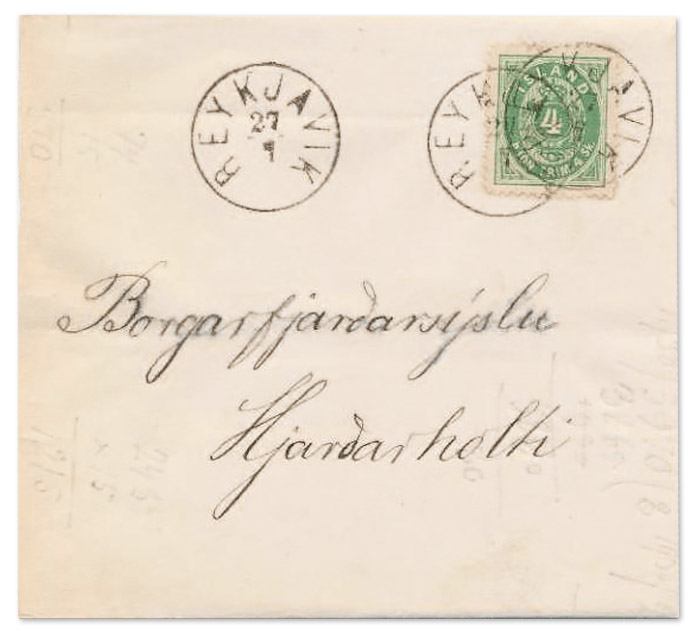 This extremely rare piece on a letter was realized two years ago. The philatelic community is aware of only 2 such specimens, both of which are highly valued by collectors. They were found just recently and both copies are already held in private collections. 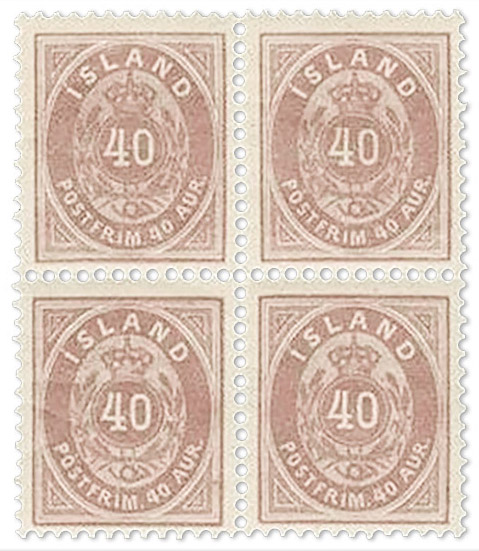 There are only 2 blocks of four stamps from this series ever found and one of them, shown on the image above, was sold at one of Cherrystone's online stamp auctions of rare stamps 12 years ago. The block is in very good condition and was bought within almost the first minutes of the event. 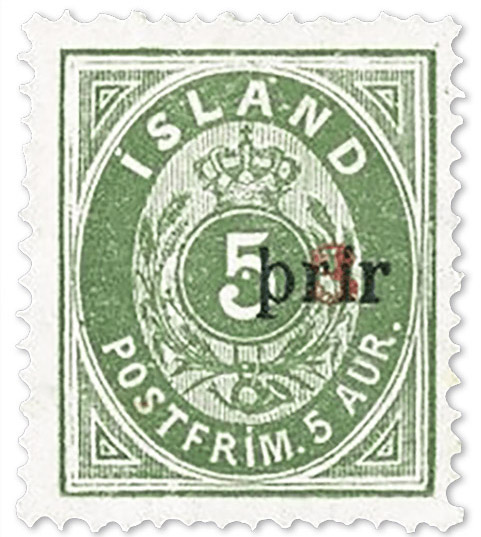 This is one of the rarest mint issues of Icelandic stamps. It is known that this is the only copy available in this condition. The stamp is beautifully-centered, rich in color, and has no flaws. There is another stamp from this series shown in this review, which cost much less than that one. The difference behind it is that this stamp is in large surcharge type. 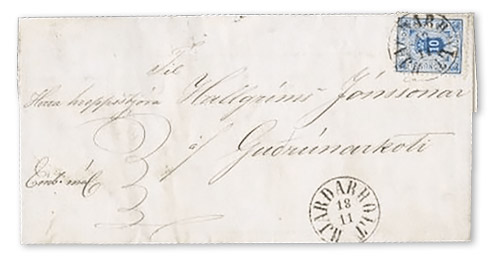 Two years ago, Spink offered for sale a very scarce blue official stamp on cover. There are only several copies of this stamp available for philatelists but almost everyone keeps hunting for those. The piece is on a cover sent to Gudrunarkoti. The lot is not perfectly centered and has tiny flaws but they do not affect stamp price to a significant degree. 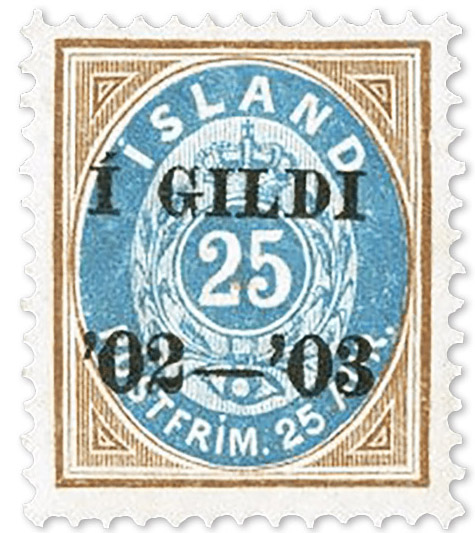 The stamp was sold by Spink 12 years ago. The lot has an overprint saying "I GILDI". The stamps of this issue were printed using WMK 112 material and colored in mustard yellow and blue. The series was first issued in 1902 and then put into circulation once again next year. 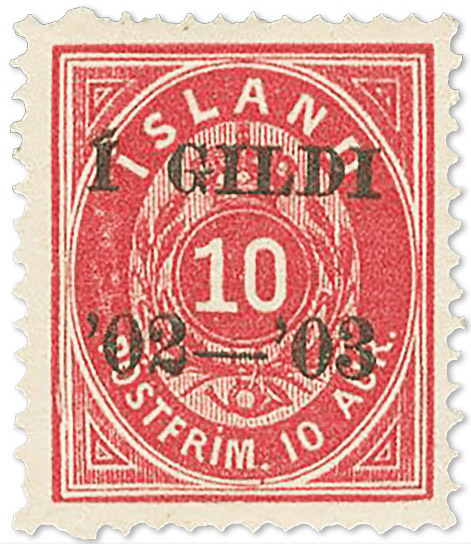 It is known that no more than a hundred such stamps were issued in Iceland. They have an overprint saying "I GILDI", which indicates that the stamp was valid for use. The lot is in very good condition, shows a rich carmine color, and is fresh. 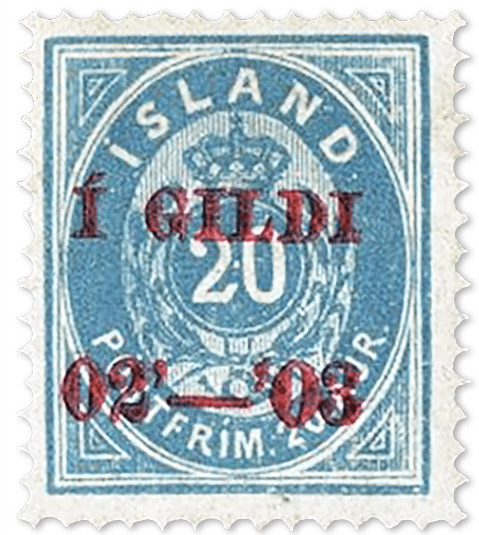 This lot is extremely scarce. The stamp itself is not that rare; however, the overprint makes it really valuable. In particular, the overprint has incorrect placement of the single quotes. The stamps with this error are almost impossible to catch. The fresh stamp shown on the image above was sold in 2008. 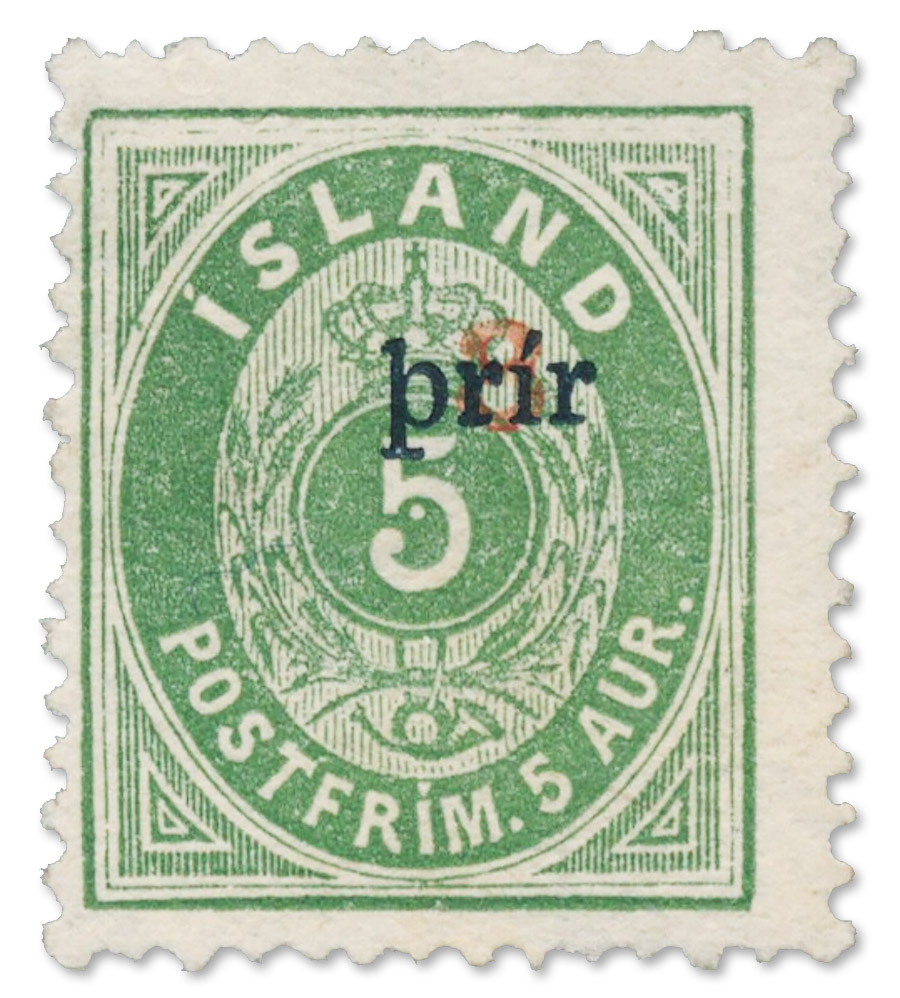 In 2012, the largest auction house in Denmark, Bruun Rasmussen, sold a rare postage stamp of Iceland issued in 1897 with an overprint for 10 thousand crowns. The first stamps of Iceland were issued in 1873 and, until the beginning of the 20th century, they were issued with almost the same pattern, repeating the design of Danish stamps. Throughout this time, paper grade, perforation, color shades and gumming changed. In 1876, the denomination of stamps changed due to the introduction of a new Icelandic currency - the kroon. In 1897, due to the lack of 3-aur. stamps, it was decided to use the issue of 5-aur. stamps with an overprint with a changed face value. There is currently a limited number of such stamps. As for the stamps sold at the auction with 14x13.5 perforation with a black imprint “prir” (“three”) over the red number “3”, according to the auctioneer, there are only seven copies left, which makes them some of the rarest and expensive stamps of Iceland.