Most Expensive and Rare Stamps of Spain

The history of postal service and postage stamps of this country dates back to the Middle Ages. This beautiful state is located in southwestern Europe (the Iberian Peninsula), which has affected its history quite dramatically and was reflected in the postal affairs as well. Postage stamps have been issued since 1850 in this country. Spain is a member of the Universal Postal Union, and Correos is its national postal operator. In this review, you will find ten most expensive stamps of this state. 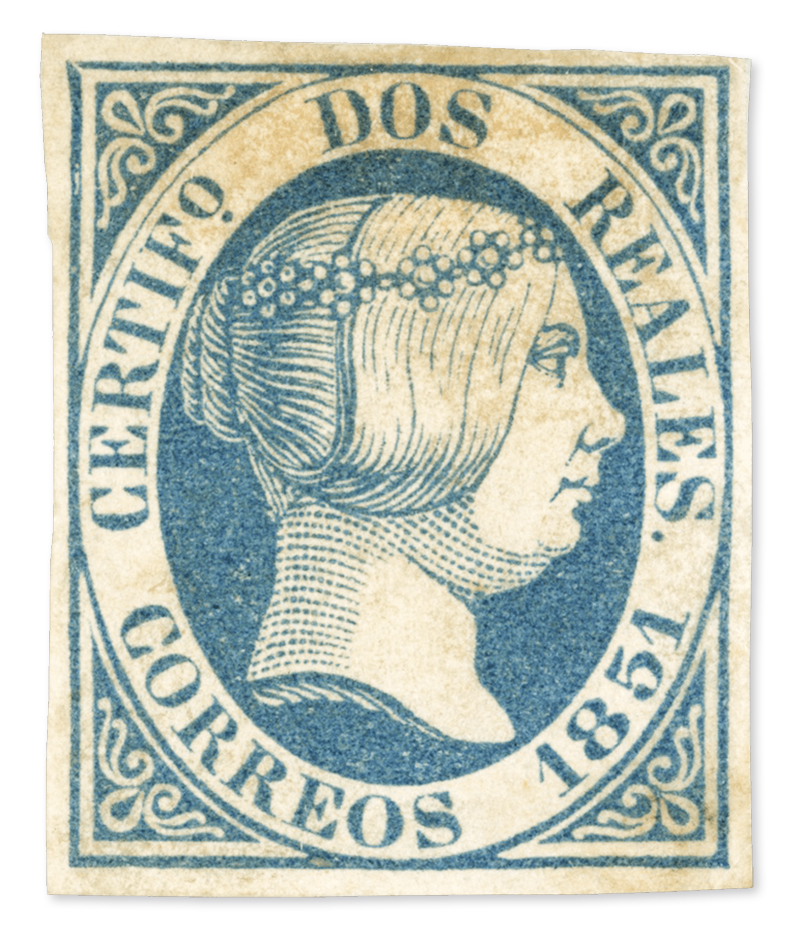 
This stamp, which is known to almost all experienced collectors, was released in 1851. Its face value is 2 reales, and the piece shows a portrait of Queen Isabella I. The peculiarity of the lot lies in the fact that it was printed with a color error. Currently, 3 copies of this Spanish postage stamp are known to exist. A real detective story is associated with the name of this stamp. Everyone who is interested in this story can learn about it from the Hungarian film "A Hamise Isabella" (1968). 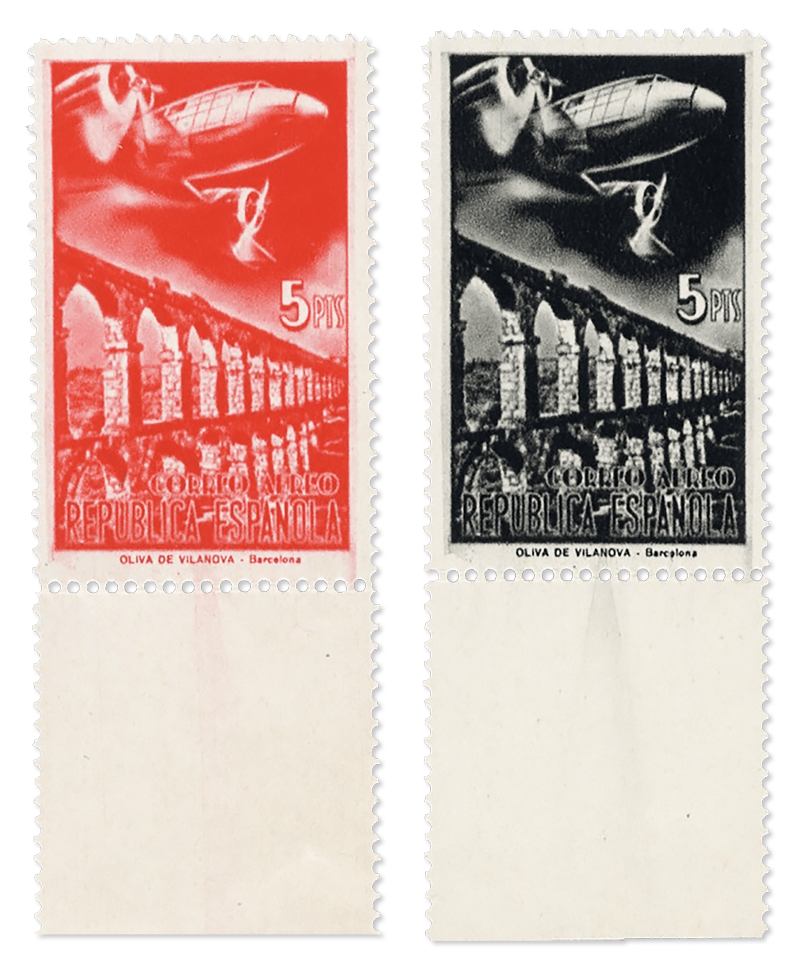 This interesting lot was sold in 2013. These are perforated, never released stamps, which are quite scarce. It is known that fifty copies of these stamps were ever issued, but they were never really used for the postal purposes. 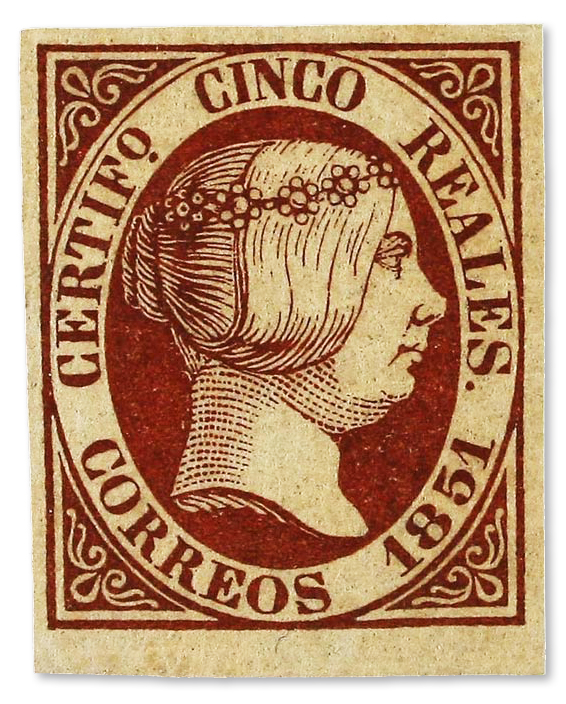 
In 2013, at a philatelic auction held by the Barcelona auction house, a Spanish postage stamp of the 2nd issue of 1851 with a face value of 5 reales and a color error was sold for fifteen thousand euros. The very first stamps of Spain were put into circulation in 1850. They depict the profile of Queen Isabella II, who ruled in Spain from 1833 to 1868. Accordingly, the portrait of the queen was printed on almost all Spanish issues until her abdication.

The name of the state is not indicated on the stamps, and the inscription saying “Espana” (Spain) appeared on them only in 1862. Around the portrait (on the edges of the stamps) the year of issue was printed as well as the face value, and the inscriptions “Correos” (mail) and “Franco” (payment). At the same time, stamps with high face values from 2 to 10 reales, instead of "Franco", had the inscription saying "Certificado". These were the first postage stamps in postal history to be used for registered correspondence. Subsequently, several other countries followed this example – later, custom-made stamps appeared in Australia, Colombia, and Canada.

The 2nd issue of Spanish stamps was released next year. These stamps also had a division into regular and custom-made ones and differed from the 1st issue in that the queen's profile was not located in a square, but in an oval. The postage stamp of Spain issued in 1851 with a face value of 5 reales was pink, however, there are rare copies with a color error printed in red-brown. Such stamps with an error, one of which was sold at the philatelic auction, are valued significantly higher. The authenticity of the sold specimen is confirmed by two certificates of 1968 and 1989. 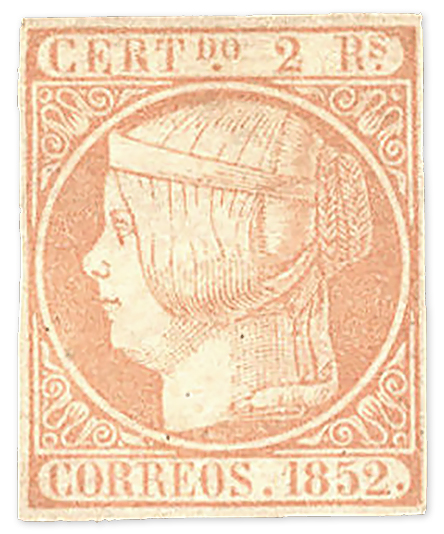 
This beautiful piece is part of the Dos Reales series. Issued in the 1850s, the lot shows Queen Isabella II as well. The stamp was printed in pale rose color. This rare stamp is in perfect condition and has no gumming. Curiously, this series was never really used for foreign correspondence. 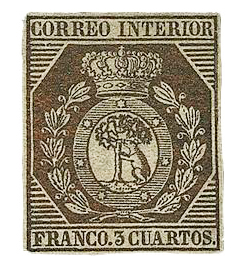 
This bronze piece is one of the most valuable stamps of the country. All of the stamps from this series have no perforation and watermarks. Interestingly, they were used for correspondence sent within the local area only. This lot is in a very fine condition and beautifully colored. 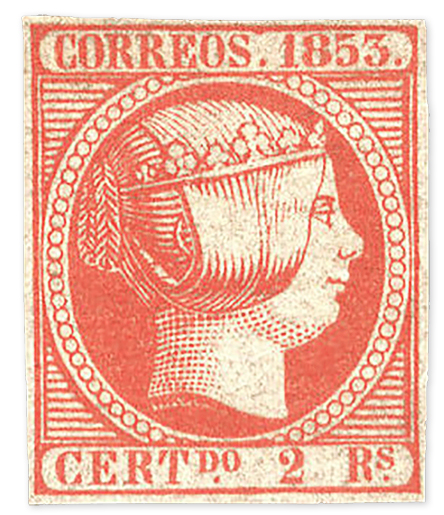 
This is another rare Spanish stamp sold by Cherrystone. The piece is quite fragile because it was printed using pelure paper. For that reason, it was inappropriate to use gumming on such stamps. The beautiful vermilion stamp was sold in 2012. 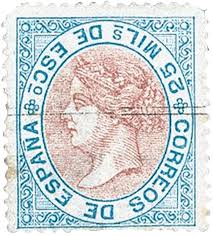 
This interesting rose-blue stamp printed in warm colors was sold in 2009. It is believed that this is the single used copy of this stamp. The lot has quite a few defects including rounded corners, signs of use, and a stain at right. Nonetheless, this did not affect the price dramatically. 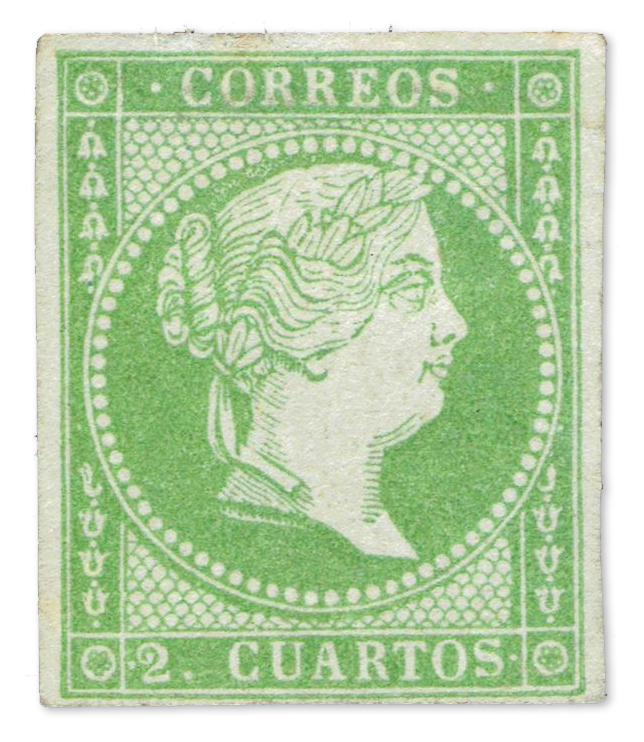 
This green stamp of 1856 was sold in 2008 at a rare stamp auction. The stamp shows Isabella II and has a 2 cuartos face value. The Edifil 43 postal stamp has a Comex certificate. 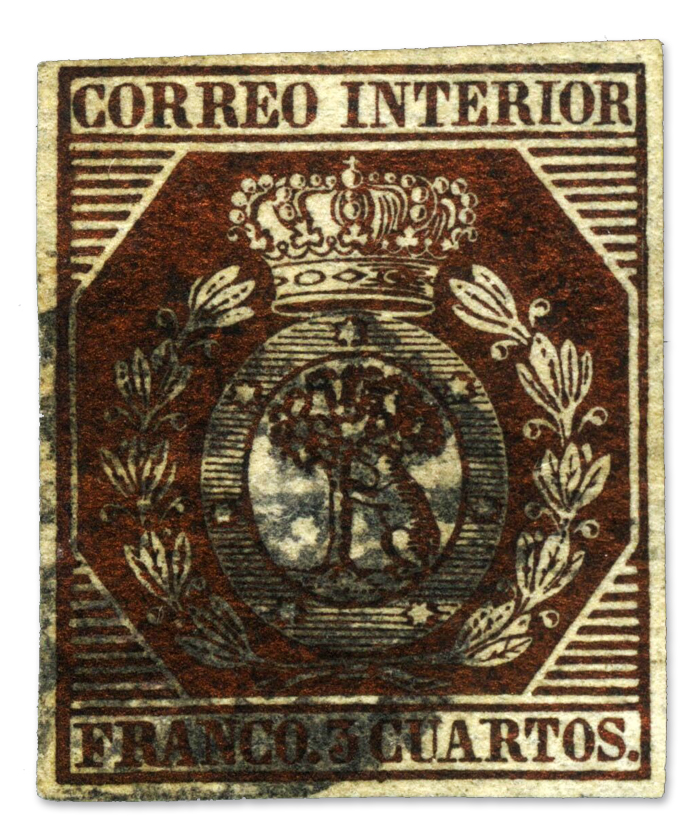 
This 3 cuartos stamp was sold at one of the online stamp auctions in 2007. Issued in 1852, the lot shows the arms of the city. The stamp has inscribed marginal labels both on top and bottom. In catalogs, the most valuable pieces are evaluated at $15,500. 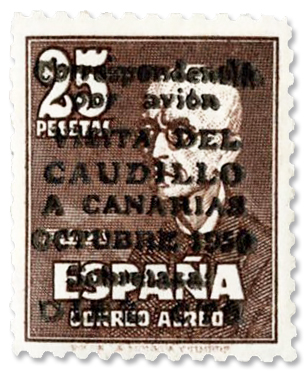 
A 1950 Spain stamp with a face value of 25 centimes with a printed surcharge of 10 centimes was sold for $1,328. This is not a rarity, but a stamp issued in the middle of the 20th century. The overprint is dedicated to Caudillo's visit to the Canary Islands. We should remind you that the title of Caudillo (translated from Spanish as “leader”) was held by Franco, one of the few dictators who managed to live to old age and peacefully transfer power to a successor in 1973 after an undivided 34-year reign. The stamp was issued with a control number on the back. However, part of the circulation does not have a serial number. A stamp which had no number on the backside, which is estimated by Scott's catalog at $3,500, was sold at the auction.