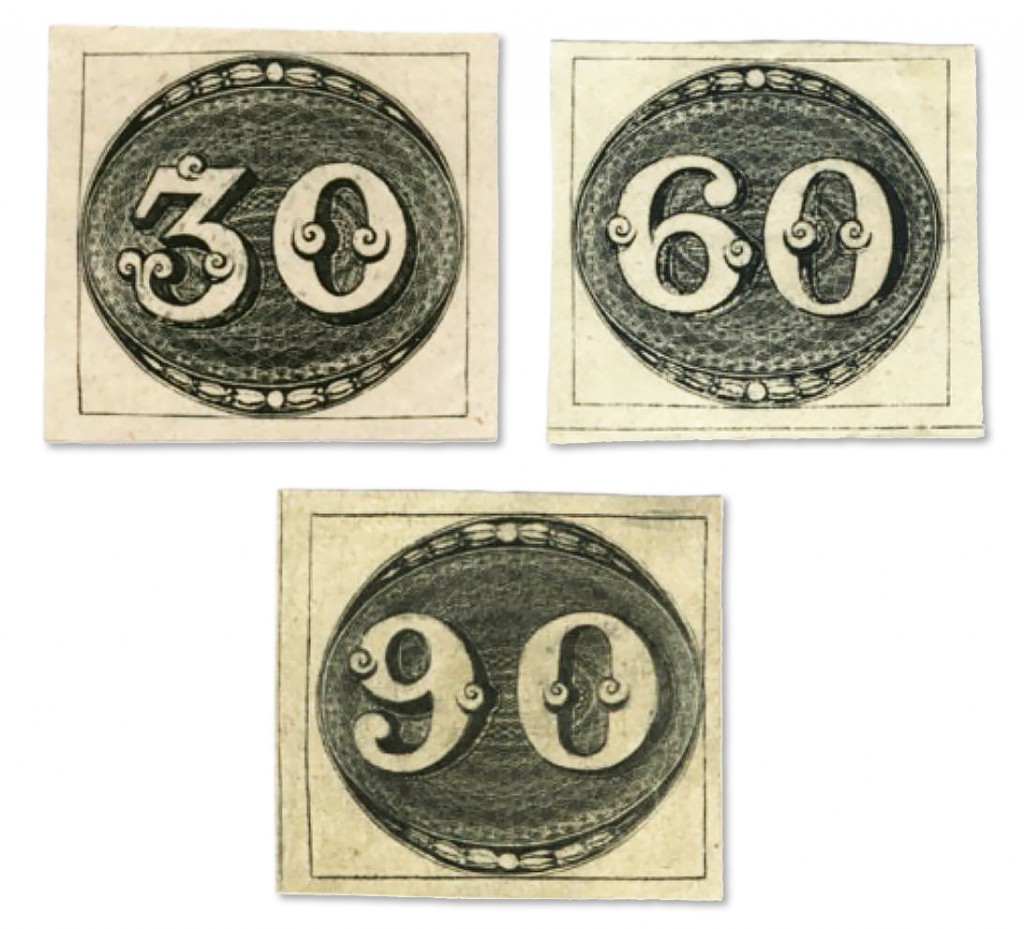 The first stamp of Brazil and the second stamp of the world.

After the UK introduced a unified tariff for postal services and increased the income of the postal service, the heads of the postal administration of Rio de Janeiro decided to employ a similar strategy. In 1842, they ordered drawings of the first Brazilian stamps and clichés from a printing company, and in May of the following year, the administration received 6 printing boards and the clichés. Already in August of the same year, the postal service introduced into the circulation their black stamps on white paper with a denomination value of 30, 60, and 90 reis, which, due to the characteristic oval pattern, later received the name “Bull’s Eyes”. This series entered the world of international philately under this peculiar name. The figure printed on the stamps was an oval with a thin internal ornament, in the middle of which were large digits of nominal values. There are no inscriptions on the post miniatures since, at first, stamps were intended only for paying for correspondence within the country.

It is known that due to the imperfections of the printing equipment, the stamps were created using paints of various thicknesses. This is how several variations of the first Brazilian stamp have appeared, which range from gray to black. In addition, the stamps were printed on paper of either yellowish or bluish shades. At stamp auctions, pieces with a clear imprint on yellowish paper (these are the stamps of the first part of the circulation) are valued the most.

The most famous strip of three sold for $1,900,000 (excluding commission) at a Siegel event.
David Feldman image.

Interestingly, most of the stamps that are exhibited at various auctions or exhibitions do not have gum at the backside. Despite the fact that the stamps were produced with gumming, only a small number of copies retained the glue base. It is crucial that the stamps were issued in large quantities, which significantly exceeded the circulation of stamps published in Switzerland in the same year. After the Bull's Eyes, the postal service also released Goat’s and Cat’s Eyes.

At the moment, prices for the copies from the very first series of Brazilian stamps can be very different. A clean stamp of 30 reis may be bought for $5,000, while a canceled copy costs around $750. A clean 60-reis stamp costs $2,000, and a canceled one - $400. A stamp with a nominal value of 90 reis costs $5,000 (clean), and a used copy is around $1,600. One of the most famous and expensive copies of this stamp (a vertical strip of three) was sold at a Siegel event in 1993. The lot was sold for as much as $1,900,000 (plus a 15% commission). At present, the Bull’s Eyes are considered rare stamps with high historical, cultural, and philatelic value. Anyone, who wants to own this philatelic rarity should contact a trusted stamp dealer or monitor the lots offered at philatelic auctions since the Bull’s Eyes pop up there from time to time.