The tariffs for mayors in Italy are not exactly easy to understand - and this article will not contribute to understanding either. I will show you a document that really "has it". Let's start with the presentation I first saw it. 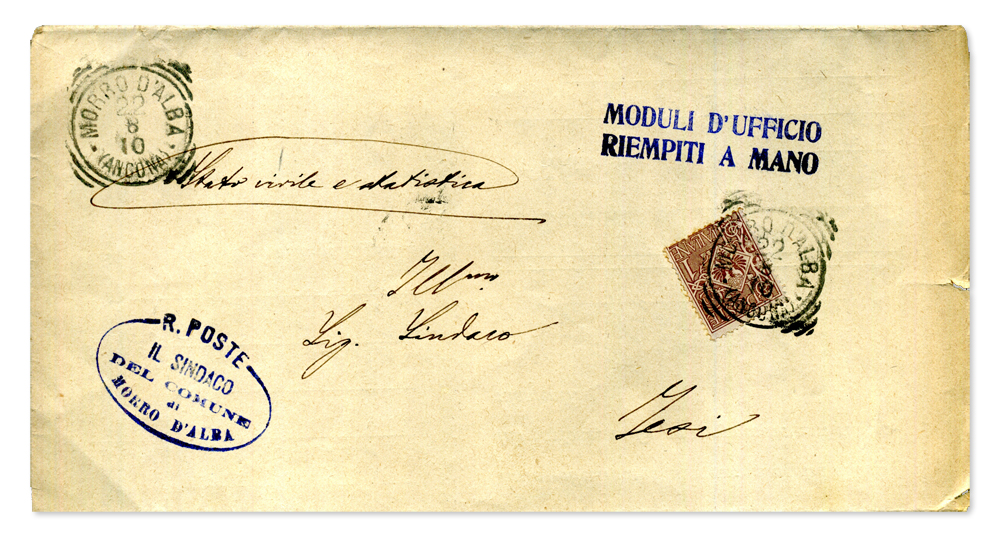 Some wrinkles and tears, in addition, a rather badly centered 1 centesimi from the floral series - nothing which one must necessarily buy – even from a fifty cent box. This document found its way onto the stack "purchases" due to the mark "MODULI D'UFFICIO RIEMPITI A MANO" (Hand-filled office forms), a postal mark, which was new for me. Which office it is, shows the confirmation postmark of the mayor of Morro D'Alba in the province of Ancona. The letter is addressed to the mayor of Jesi (also in the province of Ancona), a two and a half hours' walk away. 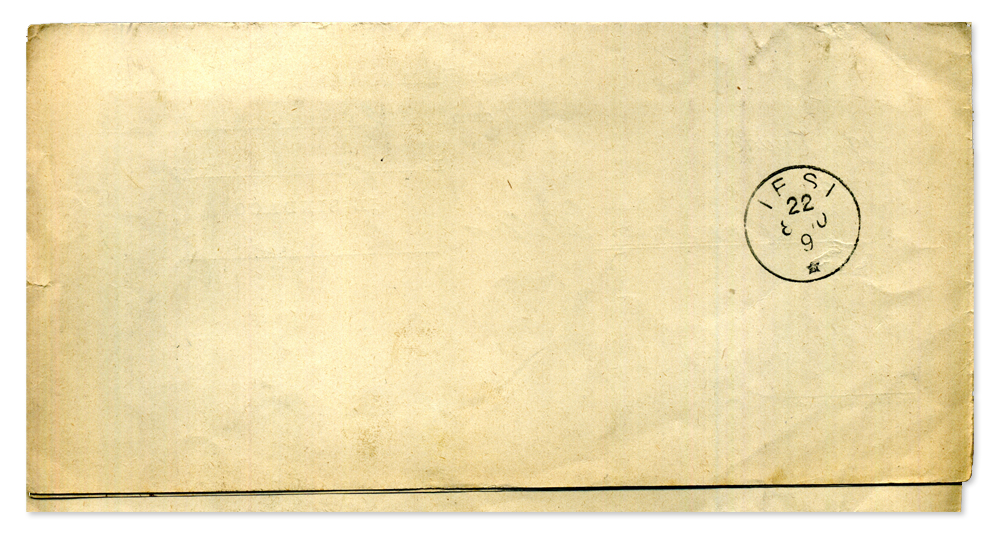 The arrival postmark on the back shows that the post was still fast at that time - much faster than today. Delivery on the day of posting is quite unlikely today, even if one knows the departure times of the mail vehicles in the early morning.

All in all, this document gives the impression of a typical anagraphe, the re-registration form of inhabitants between two municipalities. They make up a large part of the still preserved (franked) mail between mayors. 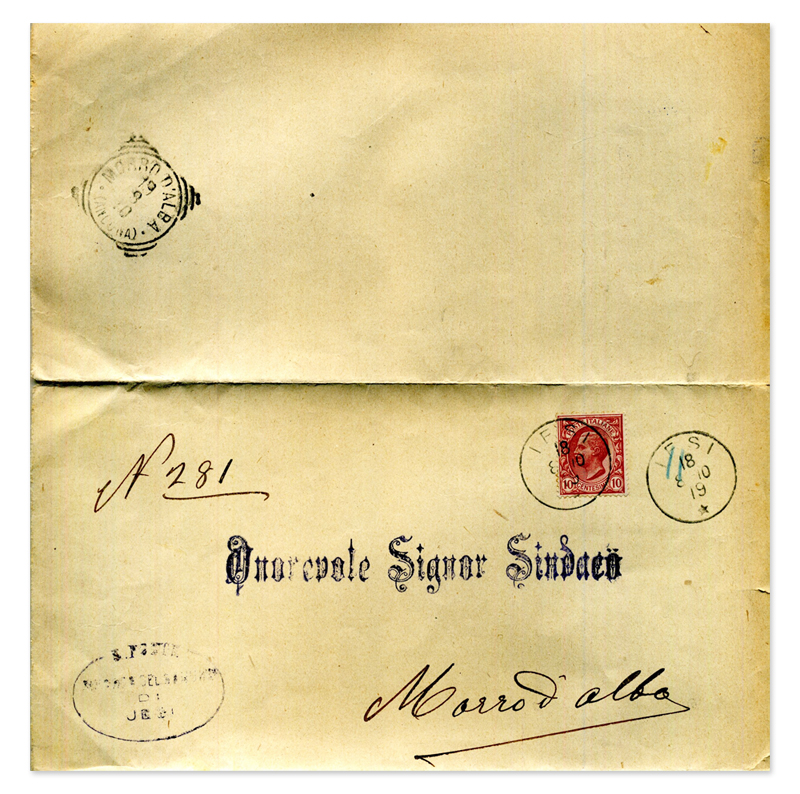 I was a little surprised when I discovered a 10 centesimi single franking on opening - most anagraphs have the same postage level for both directions. Before we now deal with the content of the letter - and a possible explanation for the different postages - we take a look at the two postmarks.

Alba D'Morro still used the "Squared Circle" from the 1890s without time but province. Nothing unusual uses of this kind of cancels up to the 1920s are abundantly documented. The rating at Prudenzano1 with 6 points is a little higher than I have expected within a 50 Cent box.
Jesi, on the other hand, uses a simple circle stamp with time, which, interestingly enough, appears in 24-hour format. I had wasted thoughts on the individual "9" in the arrival mark of the way back: 9 in the morning or in the evening, the "19" in the departure mark is unambiguous (and assigns to the arrival marks "9" o'clock in the morning, which makes a delivery on the same day extremely safe (and that surely still in the morning).

Let's get to the content: The mayor of the Comune Jesi wants to know the date of death (about 8 years ago) of Adelelina Fioretti, "son" of Enrico and Vitali Emilia and expresses gratitude to his colleague for the information. He did not have a form (which the municipality or the mayor made himself) for this request, but the twofold handwritten replacement of the word "nascita" (birth) by "morte" (death) made a form with a slightly different diction usable.

The mayor of Morro D'Alba has answered this question with Prussian thoroughness. He confirms that Fioretti Adelina "and not Adelelina" (literally "e non Adelelina" as requested), the daughter of Enrico and Vitali Emilia, died on the eleventh day of December 1902 with the file number # 45.

Especially the correction of the "figlio" (son) with a small but decisive ink stroke into a "figlia" (daughter) makes me believe that the mayor was at work in the fields during the midsummer day and left the "writing stuff" to his wife. I don't really believe in a feminist mayor (or even a female mayor) in 1910 in the heart of Italy.

And of course, "Mrs. Mayoress" had the cash in control - why spend ten cents when one does. Mark it and go.

1. Daniele Prudenzano. Il Nuovo Gaggero. Catalogo the bolli tondo-riquadrati del Regno d'Italia, Vaccari, Vignola, 2016
2. The Author, Stephan Jürgens, is the President of the Arge Italien im BDPh (the German Study Group of Italy and its Colonies). A German version of this article is available in the printed magazine “Italien Rundschau”. 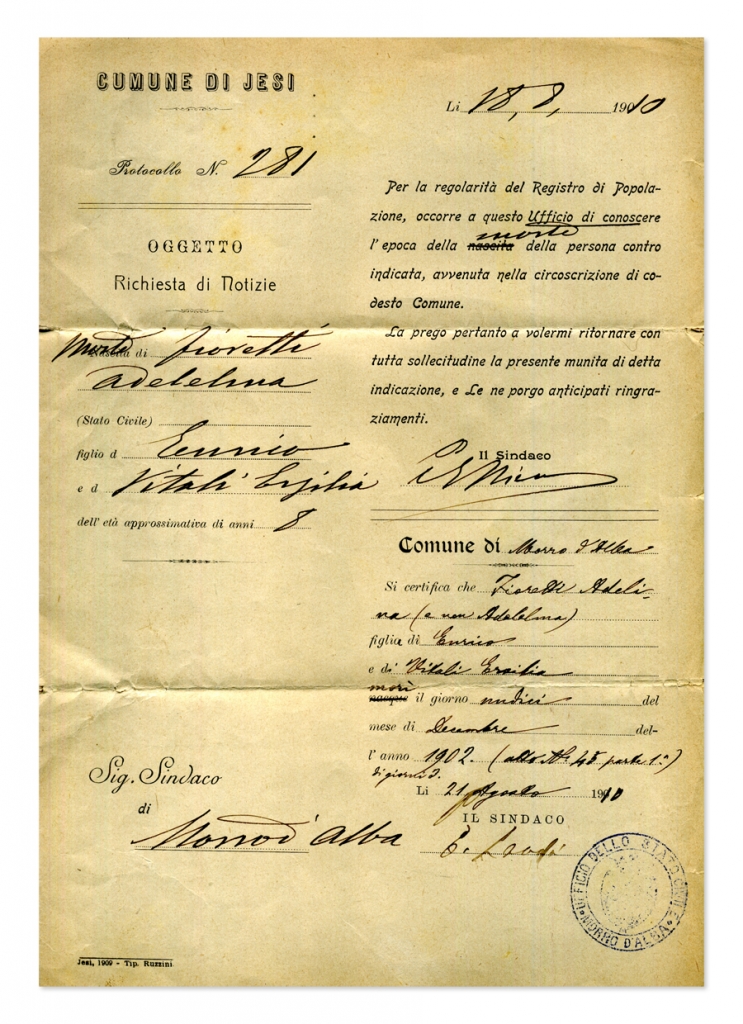