The Most Expensive and Valuable Stamps of Australia

It is curious that not so many collectors hunt for Australian postage stamps, and this means that they miss quite a few interesting pieces. In this review, you will find ten beautiful and valuable lots that were sold at various online stamp auctions and regular philatelic events. 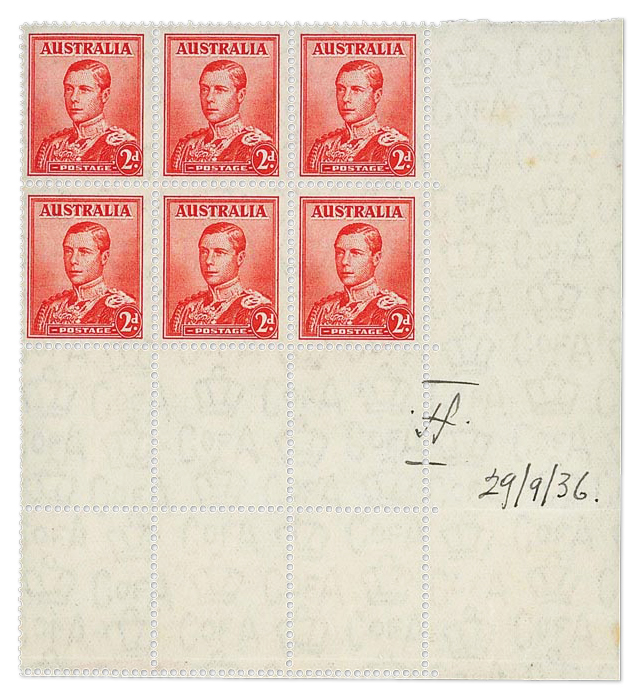 The lower right side of six unreleased stamps with a portrait of King Edward VIII with a nominal value of 2 pence from of a sheet of 1936 was sold on October 16, 2014 at a Spink auction in London. On the right wide field of the block, there is a date "29/9/36" stamped by the governor. Stamps were printed with red paint on watermarked paper depicting the crown and the abbreviation “C of A”, which have been used since 1931. The block is in very good condition, with two perforated strips in the bottom. This piece is considered one of the rarest and most valuable lots in Australian philately. The block was exhibited at philatelic exhibitions in the Royal Philatelic Society in 2009 and at the International Exhibition in Melbourne in 2013. 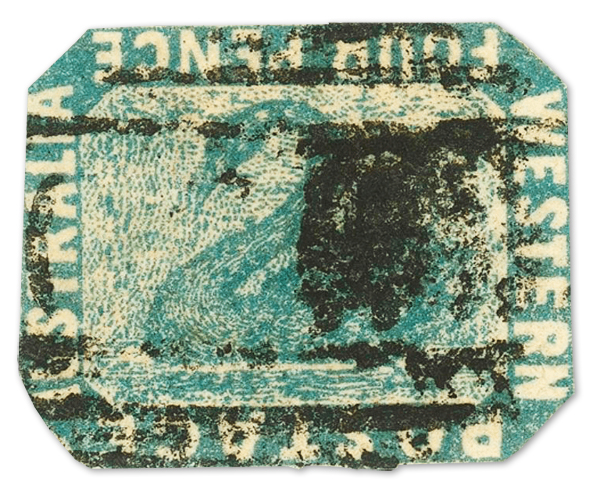 In the middle of the 19th century, Western Australia released its first stamps showing the emblem of the colony that decorated all the stamps of this state until the early 20th century. Once it was necessary to reprint the four-pence stamps. When Mr. Hillman took the printing form from the warehouse, he noticed that 2 frames were damaged. He fixed the frames but it turned out that one of the new frames was slightly inclined, and the other one was made upside down. A cliché of 60 stamps was copied 4 times for the manufacture of a printing form, and a bit less than a hundred sheets were issued before the mistake was spotted. Thus, a total of 388 copies were printed with an error. For several years, no one noticed the error and did not report it. Only 15 stamps survived. Copies that were not canceled have not been found so far. 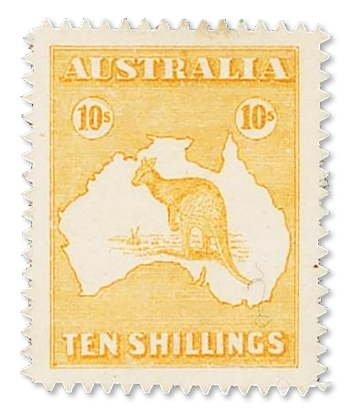 The design of this stamp belongs to the winner of a competition held in 1911. Up to that point, each colony had its own unique postage stamps. To create this piece, several designs were merged. This lot was exhibited in London 7 years ago. 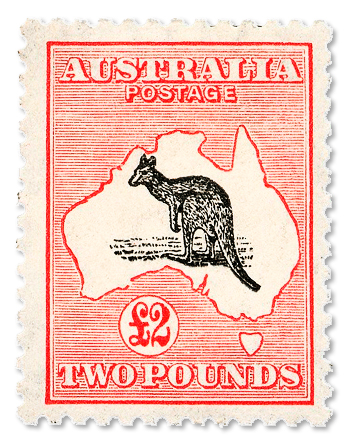 This lot provoked the debate immediately after its creation. Some people considered that the image of the kangaroo replaced the image of the king. Other people thought the design was not up to the mark. Nonetheless, this is one of the most valuable stamps of this country. The lot was sold in New York 12 years ago.

The stamps of this series were produced in the 1850s and only a small number of copies survived to these days. This strip of 4 was sold at auction in 2006. Despite the fact that this lot is not in a really good condition, it was estimated highly enough. 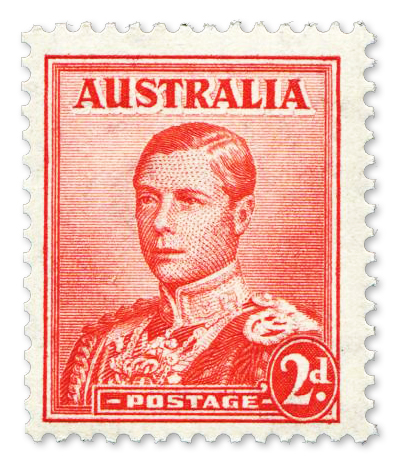 This lot shows the king in a naval uniform, which makes it particularly remarkable. Interestingly, this stamp has never been released (officially). All stamps of this series were destroyed because of the abdication of the king. This lot was sold in 2017. 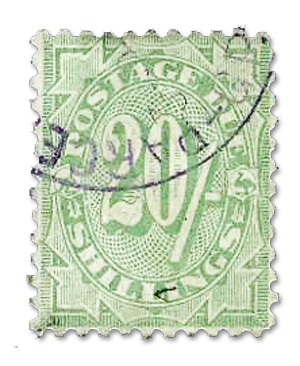 This series of stamps was to replace the existing issue of stamps, but because of how the price was printed, stamps were sold only in some regions of Australia. Moreover, this series could not be bought at the post office, which made them quite hard to find. This lot was sold at an event by Robert A. Siegel 6 years ago. 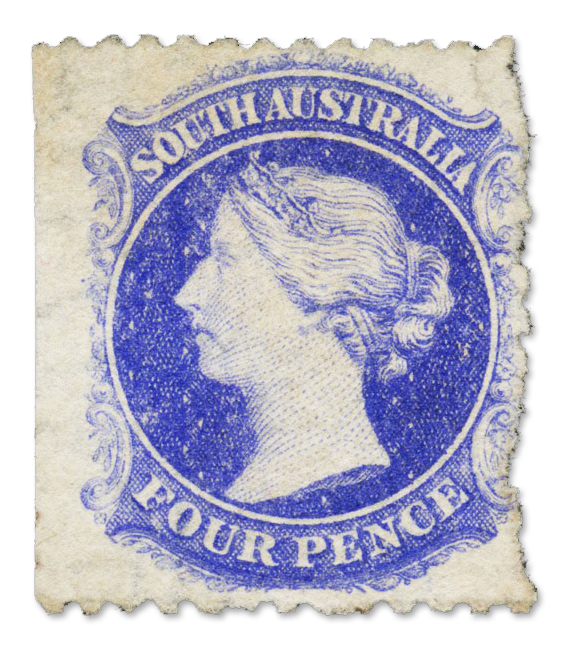 A rare postage stamp of the British colony (or rather the province) of South Australia with a nominal value of 4 pence with a portrait of Queen Victoria was sold on February 7, 2014. A distinctive feature of this lot lies in the absence of an overprint. The first issue of the series was brought into circulation from 1860 to 1869. During 1868-1879, the same series was produced in perforated sheets and an overprint was placed on them. In particular, a black overprint of “3 pence” was made. However, a very small number of stamps of this issue appeared in circulation without the overprint, and they became the object of interest for many collectors. Since then, this is one of the rarest stamps of Australia. Only three clean specimens have been found (one of which is in the Royal collection) and ten canceled copies (of which only six are in personal philatelic collections). That is, in fact, only eight copies are available to collectors. 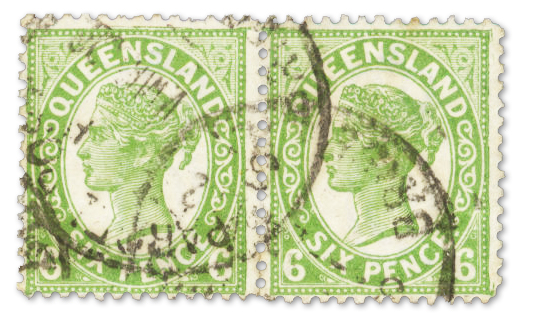 This interesting lot was sold in 2006 in Melbourne. Its peculiarity lies in the fact that the price for a stamp is indicated not in 4 corners but only in the lower corners. At the moment, it is known about the existence of only one such pair. 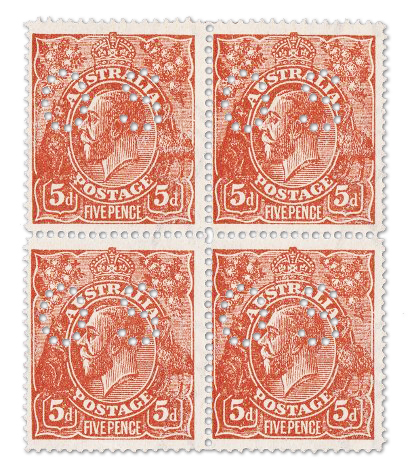 This block was printed on paper, which was left from the issue of stamps of another series, which affected the color of the stamps. This block of 4 is unique, and the philatelic community has not found other such specimens. The lot was sold in 2012 at one of the stamp auctions in Sydney.