The Most Expensive and Valuable Stamps of France

Stamps of France are valued by philatelists from various countries. In this article, you will find information about 10 rare stamps that have an interesting history of creation and will definitely be appreciated by any experienced collector. 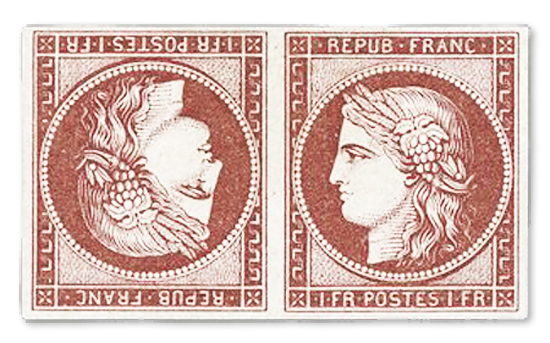 This 1849 stamp is a very rare pair from the classic series of Ceres from 1849-1850 period. At present, only 4 unused copies are known to the philatelic community. This lot was previously kept in the famous collection of Ferrari for many years. It is important that this copy was not printed this way intentionally but is a plate error, which makes it extremely rare and valuable. Eight years ago, the lot was sold at one of the Robert A. Siegel auctions. 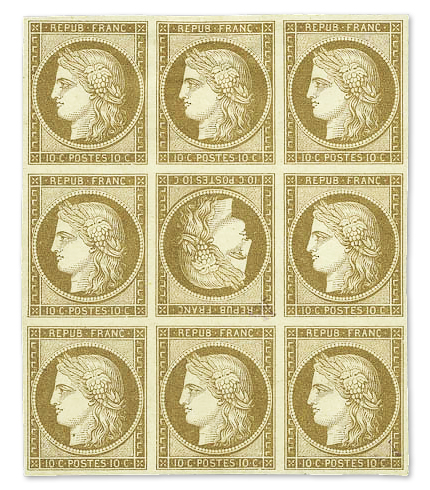 This beautiful block of 9 postage stamps was issued in the same year as the first stamp in this review. The attentive viewer will immediately notice that the peculiarity of this lot is in the stamp located in the center that has been printed upside-down, which makes it a rare printing error. Moreover, the exclusive feature of the copy is the number of stamps in the block. As a rule, collectors may come across a strip of 2-3 pieces, but this lot consists of 9 items, which has increased its value by multiple times. The lot was sold at a Siegel event as well 9 years ago. 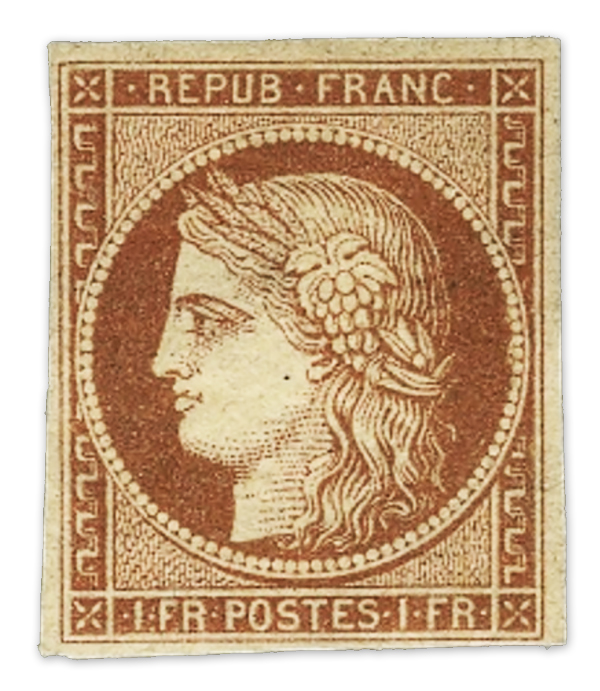 This is another rare postal stamp of France of the 1849 release. This series was printed in just two different colors, and all items are united by a common motif (image of the goddess). The symbolism of this issue lies in the fact that the image of the goddess denotes the rise of a new republic. The lot was sold at a Siegel auction. The piece is in near-perfect condition, without any defects, and has the original gum. 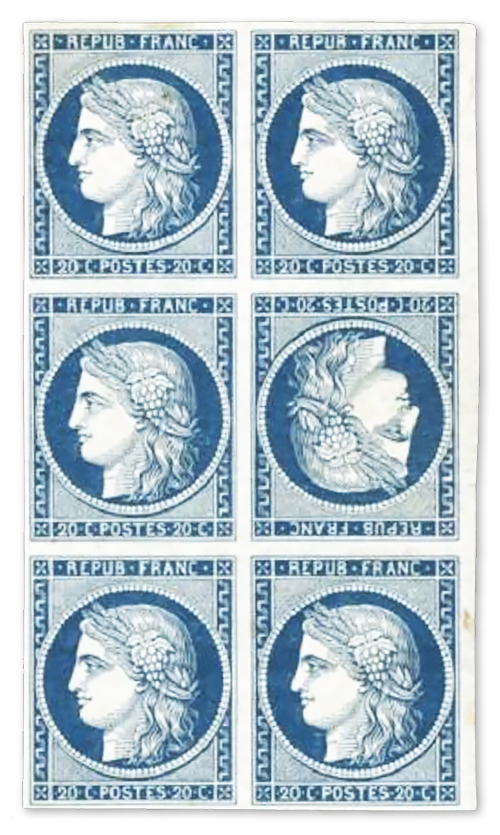 These pairs were released in 1850 and have been in circulation for 2 years. A large number of such inverted pairs survived, but only 2 unused pairs remained intact. These items are considered a rarity and are highly valued in the market. It is known that this series was created by Anatole Auguste Hulot. He produced the stamps of France until 1876, after which his works were transferred to the Bank of France, which offered more favorable production settings. Hulot is considered the inventor of tete-beche. Some sources believe that the first tete-beche appeared as the result of the error in the manufacture of the printing press, while others consider it just an advertisement and even a marketing solution used to emphasize the impossibility of counterfeiting the stamps printed by Hulot. The copy was sold at a Siegel auction in 2010. 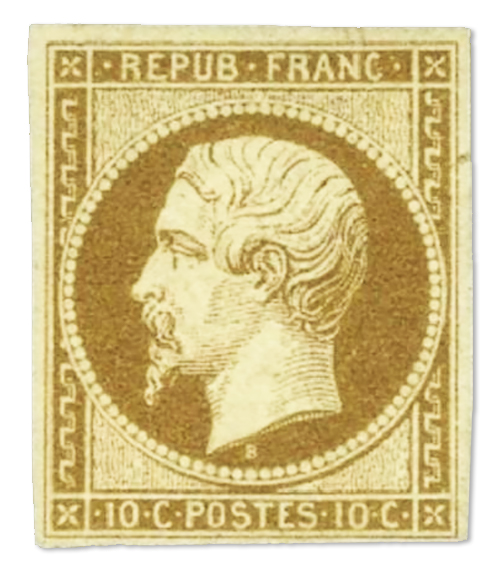 The stamps of this series rarely appear on philatelic auctions and are absent in almost all collections of French stamps. This piece showing the image of Louis Napoleon was sold for a huge amount of money at a Siegel event due to the fact that the lot is in almost perfect condition, which is not characteristic of all the other remaining copies. 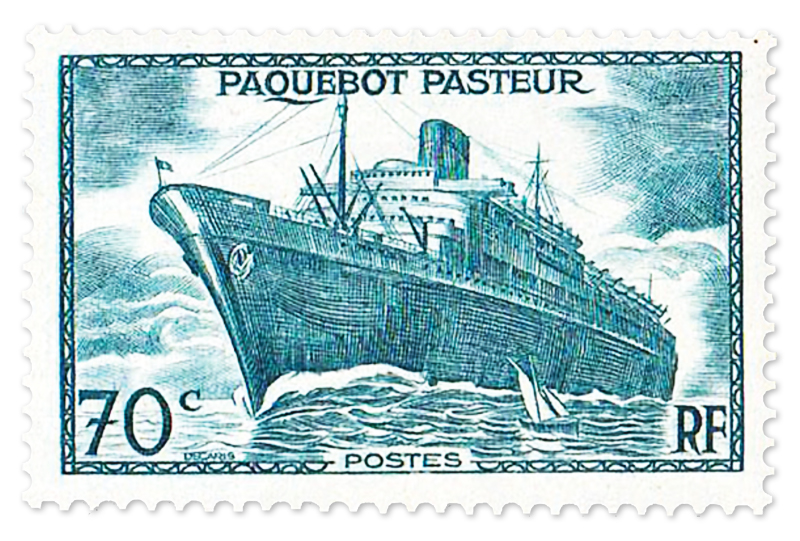 This is another rarity of the 20th century. This special stamp was issued to serve as a reminder of the steamer Pasteur, an ocean liner built for the South Atlantic navigation company. In general, it has been sailing for 41 years and was considered one of the most beautiful passenger liners of the time. The stamp depicting Pasteur was printed in dark blue-green tones. Interestingly, there is no red overprint on this copy, and there are only 8 such copies known, which makes them extremely valuable. 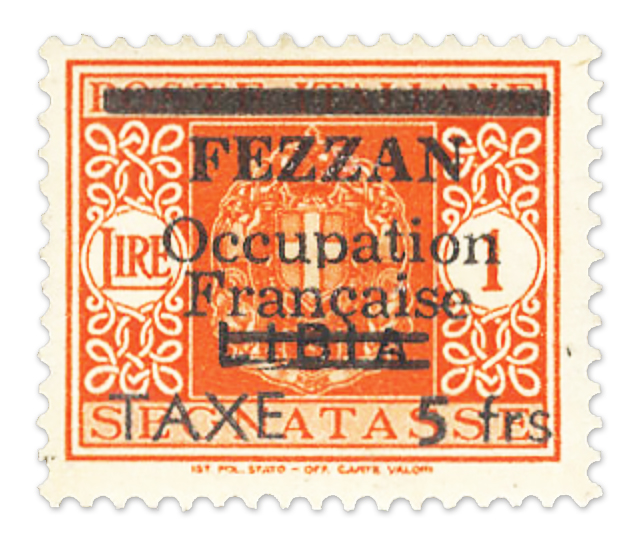 During the French occupation, Fezzan and Ghadames issued their own postage stamps, which were discontinued due to the unification of Fezzan-Ghadames with Tripolitania and Cyrenaica in the United Kingdom of Libya. These items are listed in Ceres catalog both in new and in used condition. This lot was exhibited at Cherrystone 9 years ago. 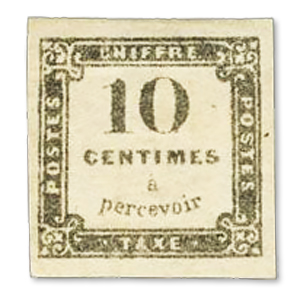 This is a French postage dues stamp for which no advance payment was required for mail delivery. This French stamp issued in 1859 is considered the first postage dues stamp. It was offered at a Cherrystone event and sold for $21,000. 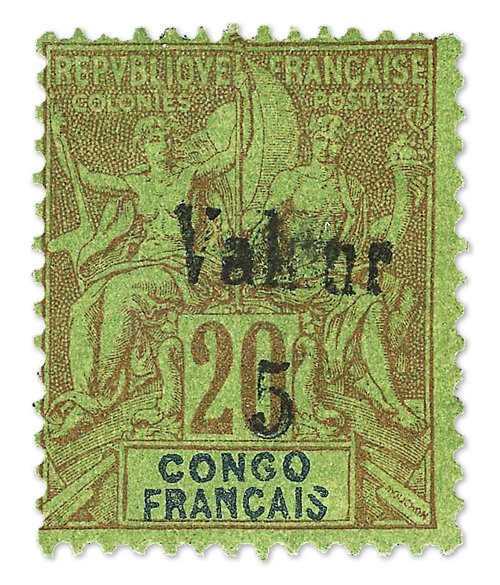 This interesting stamp was issued in 1900 and used for just 4 days. It was printed as a substitute for another stamp and, as soon as the delivery arrived, the entire replacement issue was destroyed. For this reason, only 3 such specimens survived. This lot was sold at a Siegel event 4 years ago. 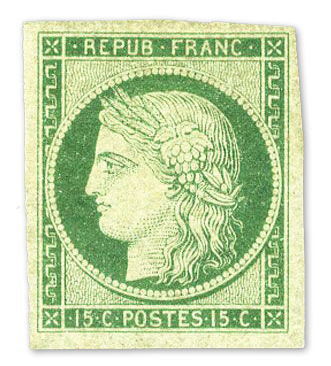 This beautiful green 15-centimes stamp was also sold with Cherrystone. They offered it at their event in March 2007. The piece belongs to the series of 1849-1850 stamps. The lot is a beautiful green stamp with original gum.