The Most Expensive and Valuable Stamps of India

Stamps of India can frequently be met at various stamp auctions all over the world. Interestingly, there are only a few rare stamps issued in this country, which makes them quite valuable. In this review, you will find information about the most expensive stamps of India (single items) sold at philatelic auctions during the past years.

This specimen was issued in 1948, soon after the death of Mahatma Gandhi, and it is regarded as the country's most famous postage stamp. It belongs to the first Indian stamps, which show an Indian. The piece has a "Service" overprint. Only 100 copies of this type are known, which makes it one of the most expensive stamps of this country. The piece was exhibited at a David Feldman’s event. 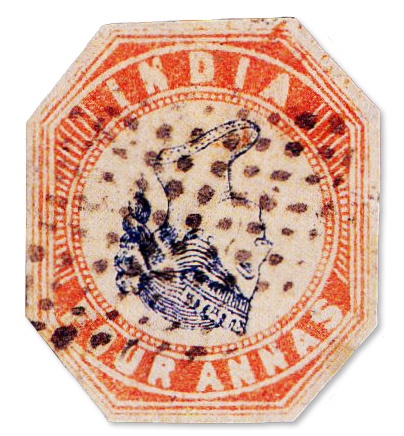 This postage stamp of British India was created in 1854. It has an octagonal shape and was printed in red and blue colors, and the design of which repeated the portrait of Queen Victoria. The peculiarity of this piece lies in the fact that the portrait of the queen was printed in an inverted manner. This is considered the most famous philatelic error of Asia. It occurred during the printing of the sheet when four matrices with the portrait and two with a frame were used in multiple variations. With one of these combinations, the sheets were mistakenly inserted into the press after the frames had already been printed. The lot was realized at Spink's event. 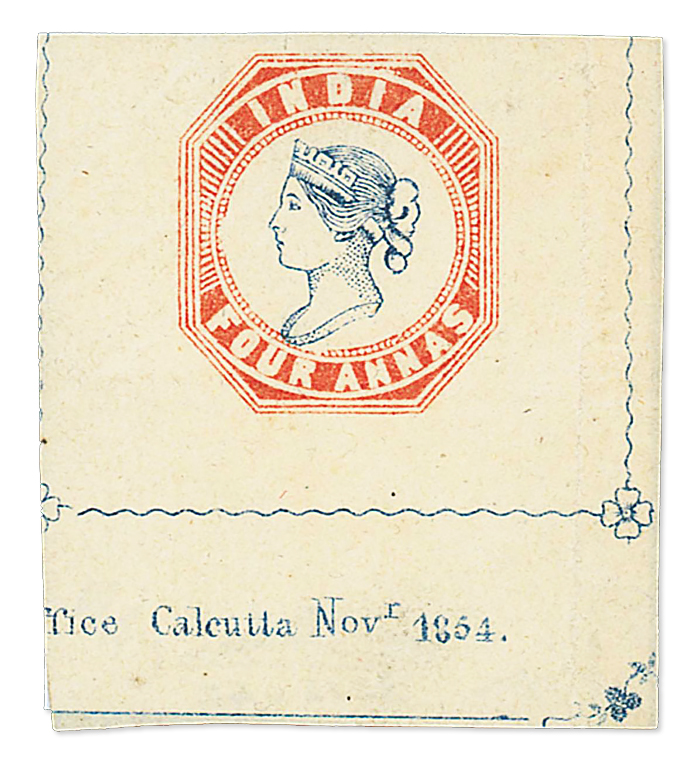 This is another copy of the stamp shown above. However, this is the second printing of this Indian stamp. The stamp has long been kept in the collection of Mr. Burrus. The piece was offered at Spink as well. 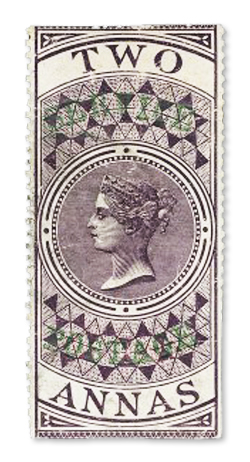 This stamp is a true rarity because it is the only saved copy with inscriptions intact. The series was released to stop the officials who were using postage stamp for their personal affairs. The stamp shows the common image which is the profile of the queen. The lot was sold at a Siegel auction. 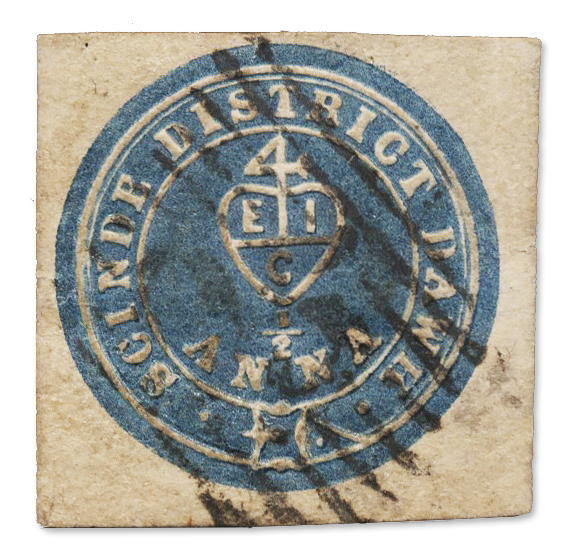 This is the famous ½a blue Scinde Dawk. The series was created back in 1852 in two colors - red and blue. Initially, the stamps were supposed to function as a seal but they turned out to be too brittle. For that reason, the majority of these copies were ruined. The stamp shown above has been sold at David Feldman auction. 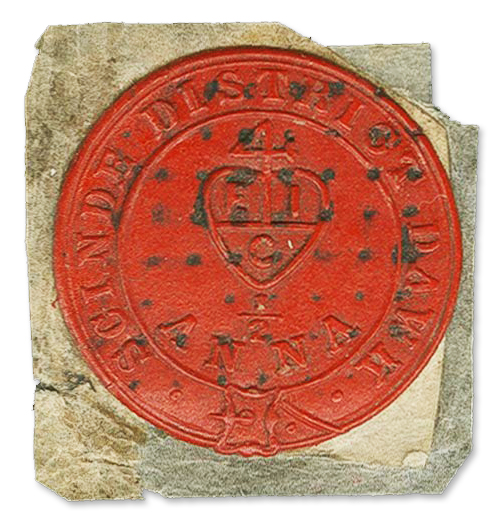 As stated earlier, Scinde Dawk stamps were created in two different colors. This is the second type of stamp. It is known about the existence of only a hundred such copies. The piece was sold at HH Harmer's auction. 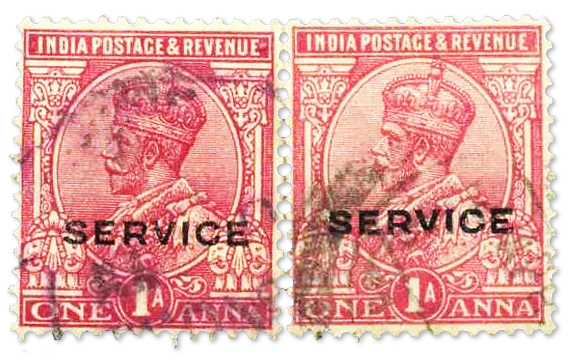 Image shows the stamps example of stamps, but with "Service" overprint.

This series of definitive stamps were created in the late 1920s. The origin of this stamp is unknown; however, there is a hypothesis that this stamp with King George V might have been created when the stamp was accidentally crumpled during printing. The lot was realized at Christoph Gaertner event. 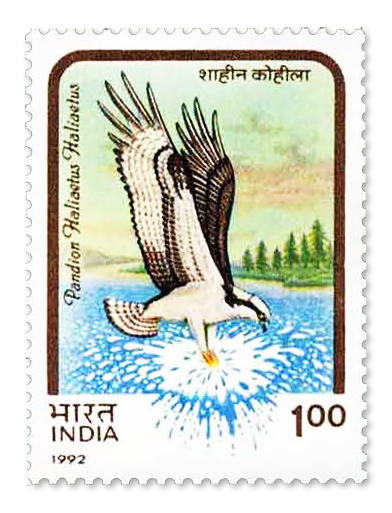 The stamp has a denomination error, which has made it particularly rare and valuable. As it is stated in various sources, the stamp was supposed to display 2r. However, a printing error was made, and the stamp got a 1r denomination. The error was soon noticed, and the stamps were destroyed. Only a few copies of this stamp are known to the philatelic society. 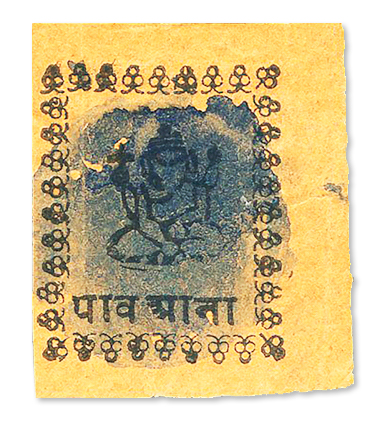 The piece was created in Dutia, which is a small area in the central part of the country. At the end of 19th and beginning of the 20th centuries, this state was printing its state-specific stamps. Only 4 specimens have been saved, and one of them has been sold at Cherrystone. 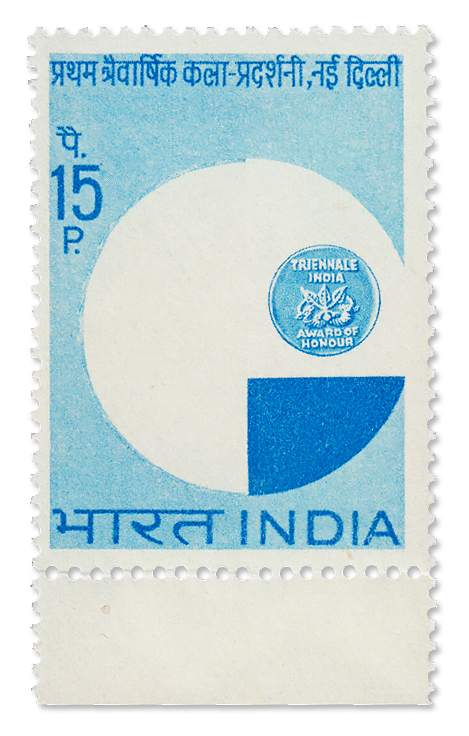 This rare stamp was released back in 1968 to celebrate an important event in the artistic life of the state. In particular, the piece celebrates the First Triennale. The copy also has a printing error since it does not have an orange color to it. The lot was realized at Siegel.