Philately professionals have put themselves into this game appealing to memory, knowledge, and experience - to determine the rarest stamps of France, or exactly, find the ones most difficult to find.

Here are some rarest stamps, having the smallest number of copies. We now offer you to taste this stamp cocktail with the rarest essences. These stamps’ value is invaluable. 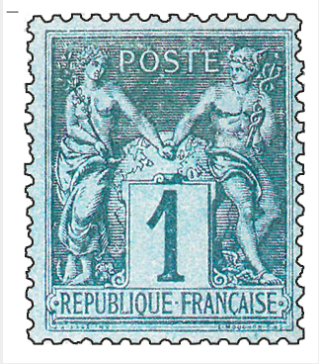 The New Prussian blue in good quality is an excessively rare stamp. If you look at those that are reproduced in the sales catalogues - they rarely meet the quality criteria: intact gum, perfect centering and teeth, shade intensity and freshness.

Prussian Blue rarity is related to its very small print made by the printing company while it was still dependent on the Banque de France. It’s also known that the 1c imprint faded quickly. 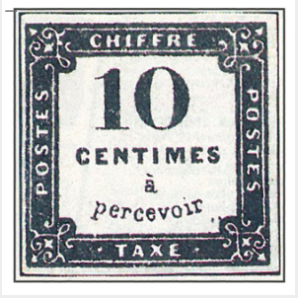 Many philately professionals admit to having seen this stamp two or three times in their entire career. This rarity is original and may be explained by the following reasons:

- the stamp had not been sold to the public (only the factories had it);

– it was used until exhausted (about six months);

- its print run must have been very low in lithography. No. 2, the 10c typographed later started to replace it in February 1859, one month after its entry into service on January 1. As for the new 10c lithographed without gum that can be found more often, they are in fact the stamps that have escaped the obliteration. 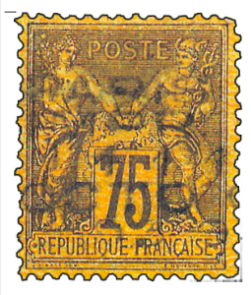 A number of French stamps are listed at 4.500€ and even more, but very few of them are as rare as this one.

How many of them are known today? Well, there are two of them at the musée de la Poste in Paris. This stamp has been known for a long time, and it previously belonged to the Morel collection of Arleux.

In 1964, the public discovered a third copy on the "Philatec" exhibition.

The experts have long not been able to examine the stamp. Finally, just a month ago, a new 75c Sage preo was discovered in a collection. It was duly expertised and signed (this is the copy reproduced here). The stamp was later sold to an amateur. But one thing still remains doubtful: is this stamp the one exhibited in "Philatec 1964" or just a fourth copy ? 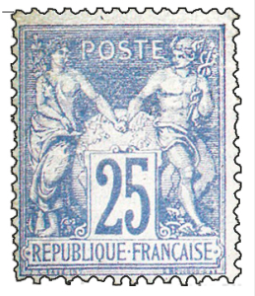 Its rating is the second position behind the Prussian Blue. But, unlike the latter, it is quite obliterated: proof that it has served a lot and was very little preserved. N under U, N under B, contemporary collectors of this Sage care little about the problems of types. This neglect of the ancients turns out today very paying: 11.500€ for type 1 (N under B) against 650€ for Type Il (n°78 N under U).

In a good quality, the 25C overseas is rare but it probably suffers from the notoriety of Prussian Blue. It’s known to be an excessively rare variety. 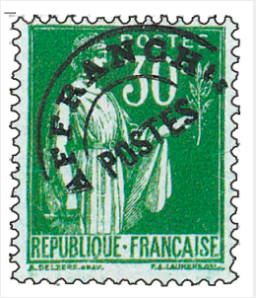 This stamp has never been served. It’s rare even if the exact number of sheets (of 100 copies) that have been placed on the market is still unknown.

Prepared to replace the stamp of the same value, this type had never been issued because the remaining 30c stocks were largely sufficient to cover the demand.

At the time of the incineration, some of these stamps escaped destruction and got onto the philatelic market. They offer 8.500€ for these stamps in the catalogues - this price corresponds to its rarity level. The price could be even higher if the figure is perfectly centered and has intact teeth. 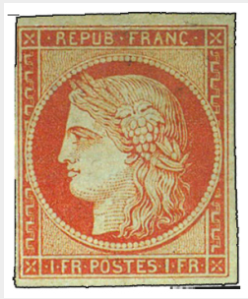 It has a name like other world rarities and is better known by its word "Vermilion" than by its number in the catalog, despite this one being 7, a lucky number.

If we talk about Vermilions in general, surely they are not very rare stamps. But if one is looking for a particular shade, a very bright Vermilion for example, or a new, well margined, impeccable copy - it becomes extremely difficult to find them... even if you’re willing to pay red! Some experts have been looking for this one for several years.

The record price of 300.000F (45.700€) had been achieved for a Vermilion in a perfect condition with original gum and almost intact. This event took place during an auction in Switzerland, in March 1987. 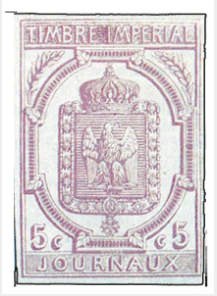 Its copies can be counted by the fingers of a hand.

Its degree of rarity is equivalent to that of tax No.1 in a perfect state. But this stamp was predestined from the very beginning.

It was sold very poorly because of its high face value for the tax and newspapers postage which always had a particularly low preferential postal rate.

Many Parisian newspaper publishers circumvented this high tax by getting printed elsewhere.

Moreover, only one stamp of the six had been obliterated. 5C daily stamps had never been issued and still had only a very confidential use. 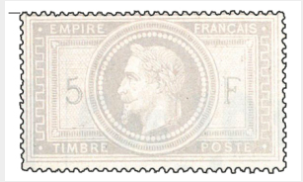 A great one among the classics.

This is a rare object almost cannot be found in a good quality. Its market value is 9.000€  - 11.000€. Some of its shades can be bright. The 5F can indeed vary from gray-purple to gray-lilac and even gray-blue!

This stamp was a “commercial failure” in its time: only 1,2 million copies had been put into commerce out of more than 4,5 million copies manufactured. This stamp had often aged badly in the filing cabinets of the cashiers because it had been rarely bought due to its high value.

This stamp has become rare today because it’s very fragile: a paper easily crumbles, teeth always break, gum changes, and the color easily fades. All these drawbacks reduce the number of copies remaining in a good quality.