In the south of the Arabian Peninsula, there is a federation of seven Arab states, which is currently called the United Arab Emirates (UAE). At the turn of the seventies of the 19th century, these small Arab principalities became the most famous countries in the world of philately. Philatelic agencies entered into agreement with these states to initiate the issuing of postal stamps. From that moment on, an avalanche of beautiful postage stamps surged on collectors. However, unlike the Seebeck stamps that we told you about in the previous article, these stamps have been printed in New York, Tokyo, Rome, Brussels, London, Geneva, Beirut, the Bahamas and in many other places of the world. In the majority of cases, the pieces did not get into the country whose name they carried since they went straight to philatelic trading companies. 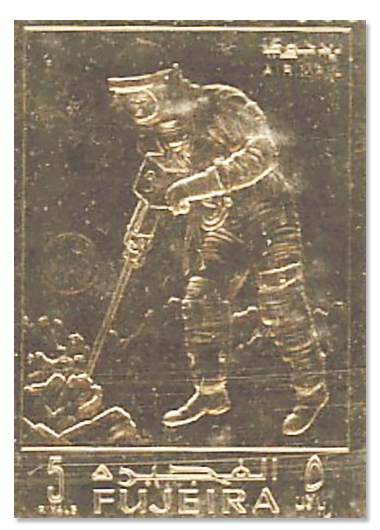 A stamp printed on gold foil.

Curiously, canceled stamps were also never placed on letters or covers. They were canceled by the same firms and organizations often directly in the course of the printing process. It is important that these stamps did not perform their direct function, which was to indicate paid correspondence. Many such series were accompanied by unperforated issues and various memorable overprints. Some of these stamps were printed on gold and silver foil. 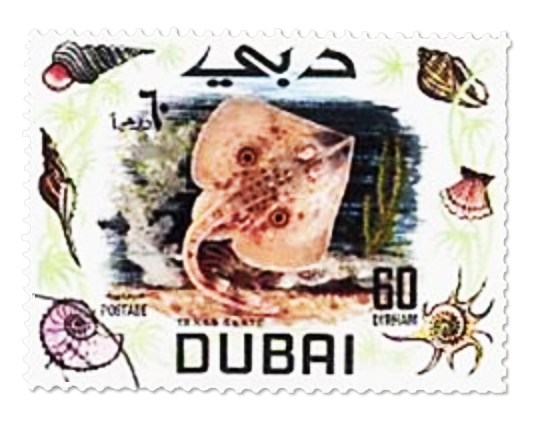 A stamp of Dubai, which has never reached the homeland.

To understand the scale of the release of stamps of the Arab principalities, one should take a look at some historical facts and figures. The first series of postage stamps of the UAE was published in 1961. The circulation of this series consisting of 11 pieces was enough for serving all the principalities for 3 years because the majority of the population was illiterate at that time. In 1970, the principality of Ajman alone issued 61 regular and 71 airmail stamps.

Another example of the UAE stamp.

As a result of this philatelic madness, all the stamps of the UAE released after May 1967 were blacklisted by the Fédération Internationale de Philatélie. In addition, all speculative issues of stamps that were released after January 1, 1968 automatically fall into the black list. In connection with this radical decision of the FIP, the editors of the three largest world catalogs of postage stamps (“Ivert”, “Scott”, and “Gibbons”) have ceased to indicate the price of these issues in the catalogs. All these measures forced the postal administrations of many countries from the “blacklist” to abandon the services of philatelic agencies and gradually employ a moderate emission policy. Since August 1972, most of the emirates stopped issuing their own postage stamps. They were replaced by the universal stamps of the UAE. The Ministry of Communications of the United Arab Emirates decided to control issuing plans strictly and reject the release of new speculative issues. At present, these pieces are not considered rare stamps; however, quite often, one can notice requests and questions from collectors at various stamp auctions or in discussions at philatelic forums wondering whether they could purchase stamps of that period.