Stamps That Are More Worth Used Than Unused

Basically, stamp collectors are more after stamps that have never been in use – or mint stamps, if you want. (Of course, the term ‘mint’ has absolutely nothing to do with your favorite toothpaste flavor – rather, it goes back to coin factories – mints). Such stamps are usually considered more valuable at philatelic auctions – which seems only logical, for it should give pleasure to own something that bears no signs of previously being used by someone else.

However, when there are too many mint/unused copies of the same stamp and only few used ones (rarely the case but still), the situation with value turns the other way around. Here are some examples of when used stamps are more elusive – and thus more wanted. 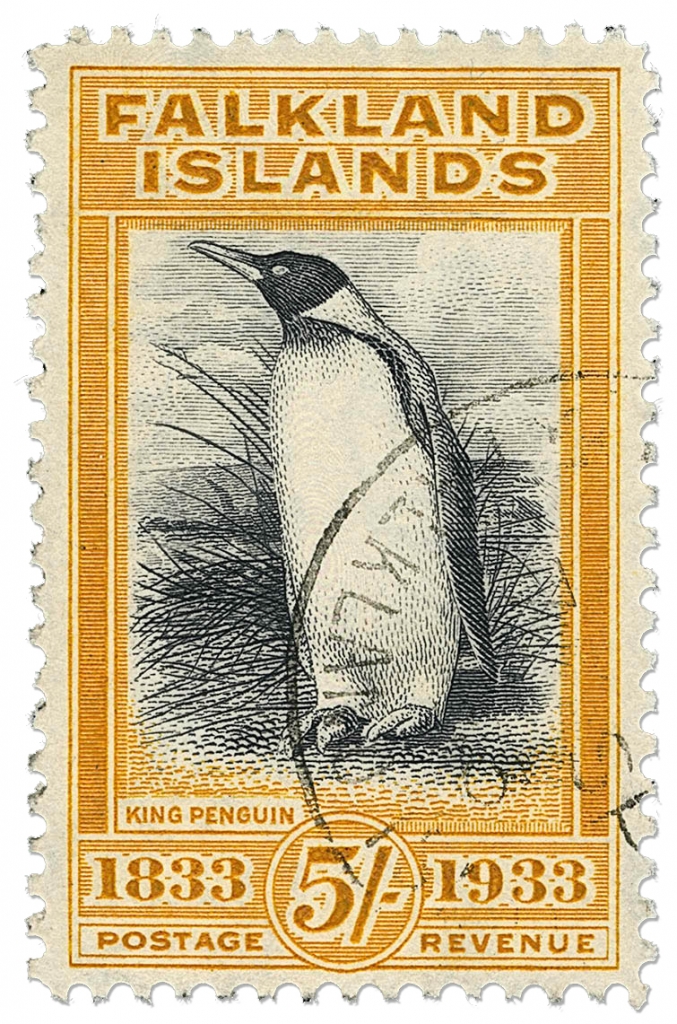 This collectible stamp is part of the 12-piece set issued in 1933 to commemorate the 100th anniversary of British control of the Falklands. While complete sets are naturally prized by collectors, it is the 5-shilling penguin that enjoys particular attention from auctioneers, used examples being challenging to come by.

As early as in the first half of the 20th century, it prompted Madame Joseph (real name unknown), a stamp dealer who was later revealed to be a major stamp forger, to forge cancels on genuine 5/- stamps. The example shown was realized for $2,200 at the Worldwide Stamps and Postal History auction by Siegel Auction Galleries in New York on December 9, 2015. 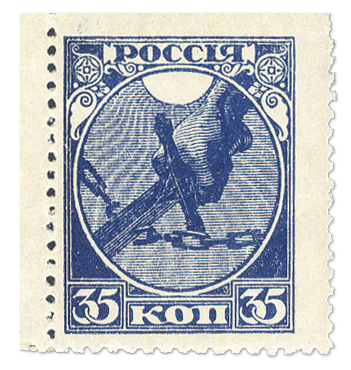 As an independent state, the Russian Soviet Federative Socialist Republic (or R.S.F.S.R.) existed from 1917 to 1922. During this five-year period, postal rates changed no less than 23 times – given the vast territory, it is therefore no wonder that some (most likely, lots) of the fresh stamps were already obsolete by the moment they could actually be used on the mail. To describe a situation when a stamp did manage to get cancelled, the word “lucky” would be a good one. 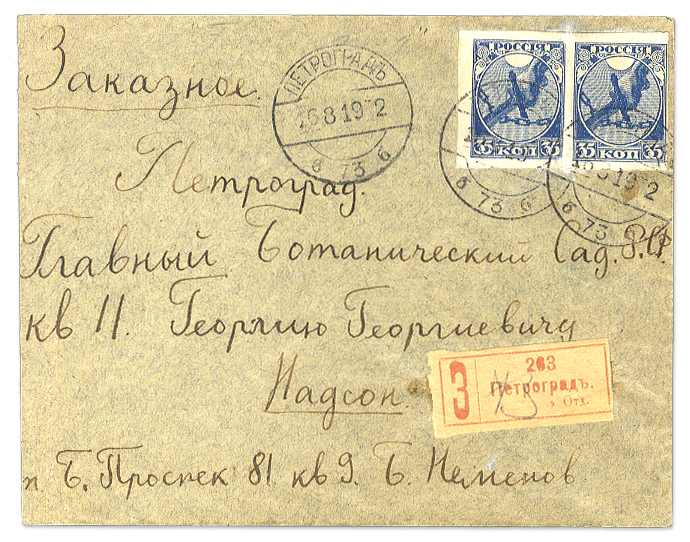 For instance, the 35-kopeck stamp in the first Post-Revolutionary set is more commonly found mint than used. At the Igor Gorski Collection: Specialized Russia stamp auction by Cherrystone, another NYC-based auction house, two imperforate singles used on a 1919 registered cover (see the image above) were realized for $1,500 in 2014. Three years later, an imperforated unused pair was realized at a Raritan Stamps auction for $500. 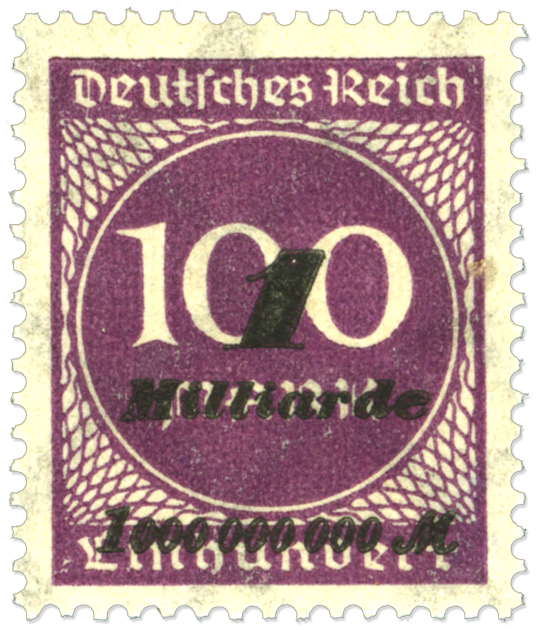 Another prominent example of how hyperinflation in a country might affect postage stamps. Back in 1923, the value of the German Mark in the nascent Weimar Republic was falling almost every day, having a devastating impact on the nation’s economy. Since August and until fall 1923, the postal service started applying re-valuation overprints to existing stamps of lower denomination as printing new stamps was no longer an option. Today, it also takes a great luck to come across a cancelled stamp of that time (which was valid only for a few weeks) among piles of unused ones. 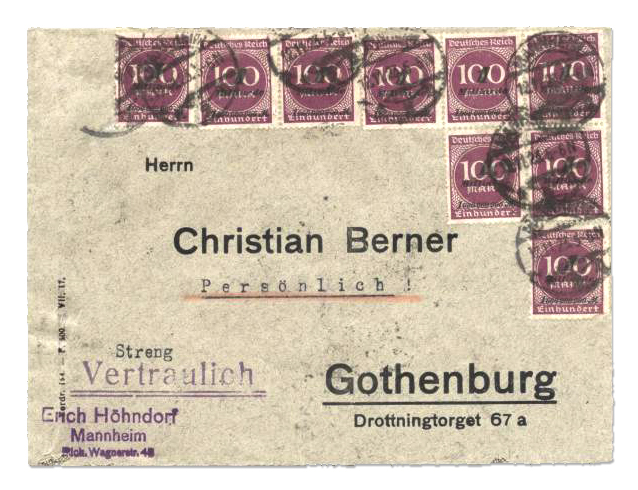 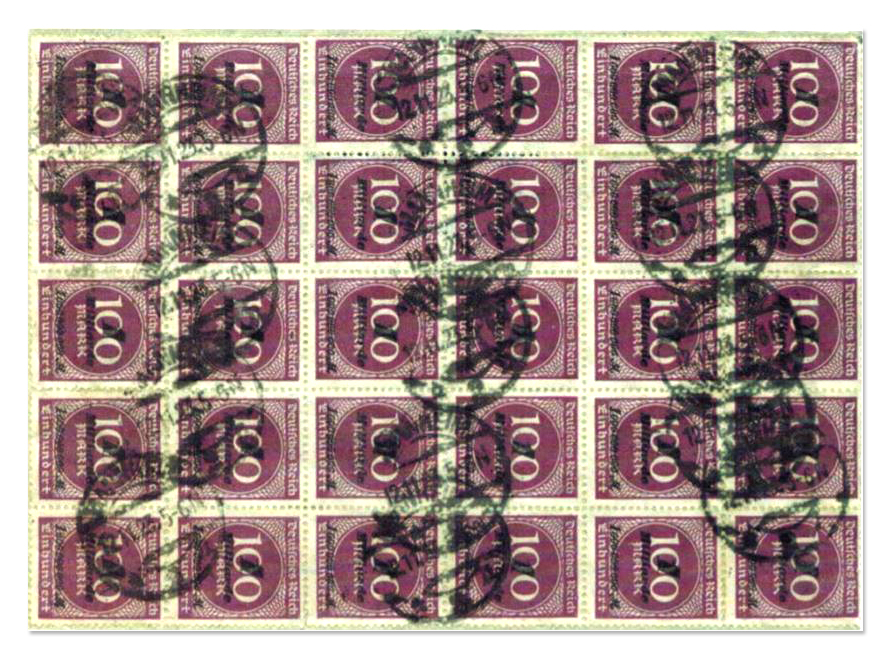 Probably the most valuable stamp of the Weimar Republic is the so-called Hitler Provisional (Hitler-Provisorium in German, a clear reference to the Beer Hall Putsch) stamp issued in Munich in November 1923, which represents a 1 bln on 100 marks overprint. In 2014, 39 Hitler Provisional stamps attached to a franked envelope were realized for €22,500 at the 28th International Auction by Auktionshaus Christoph Gärtner in Berlin.