The land of breathtaking lakes, magnificent mountains, and scenic countryside. The country that has never participated in war (you won’t find many war-related stamps here!). The homeland of the world's best cheese, watches, and chocolate. Have you already guessed where we are inviting you today? Right – Switzerland!

History buffs are aware of the fact that the postal history of the country goes back to the 1840s, when the canton of Zürich issued its firth stamp. Since that time, Switzerland saw the release of numerous collectible stamps, with popular subjects being events from the history, outstanding people, and picturesque Swiss scenery. Plunge into the postal history of Switzerland with us and explore the country’s rare stamps sold during the world’s top philatelic auctions! 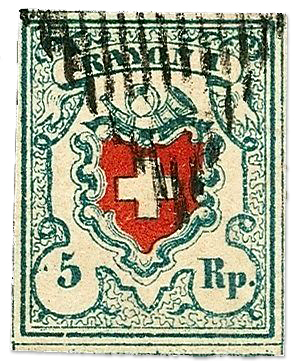 We will start with 1850 5 Rp. Rayon I, the country’s most expensive collectible stamp. What makes it a philatelic treasure?

This story will take you back to year 1848. In that year, the new constitution was issued in Switzerland, and the centralized government was established. Two years passed, and the government decided to issue a set of stamps that would be used countrywide. The stamp that you can see in the picture was one of them – a crimson shield, a milky-white cross, and a horn above it. The stamp is particularly valuable when it has a black frame around the cross. 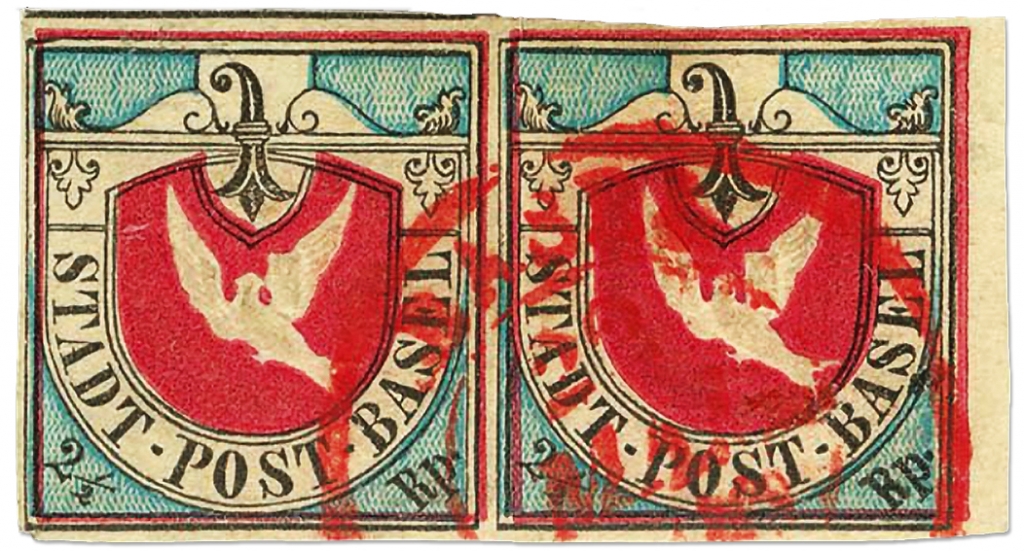 The stamp that you see above will take you to Basel, one of the Swiss cantons. In 1845, Basel issued its one and only stamp, which was nicknamed “the Basel Dove” in the years that followed.

This stamp features a snow-white dove that has a letter in its beak. It’s not just the beautiful design that makes this stamp sought-after; indeed, the stamp is recognized for many philatelic “firsts”: it was the world’s first multicolor stamp and the first stamp to feature a bird!

No surprise that the Basel Dove was realized for $114,000 in 2014. A worth-while addition to someone’s collection! 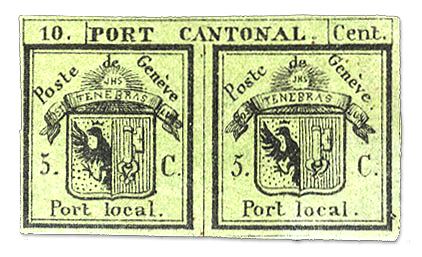 The stamp that many collectors are dreaming of having, the Double Geneva is a legendary dark green and black stamp with a value of 5/10 centimes.

The stamp was issued in 1843, which makes it the third oldest stamp in Europe. Interestingly enough, if you wanted to send a letter within the borders of Geneva (back in the 19th century), you would use just half of this stamp. But if the addressee lived outside the city, you would need the entire stamp!

However, citizens found the system complicated, and by 1845 this stamp Geneva was no longer sold at post offices. They could never imagine that two centuries later the world’s stamps collectors will be competing for this notable stamp in stamp auctions. In March 2015, one of the specimens of the Double Geneva was sold for $30,000 at the Cherrystone auction!